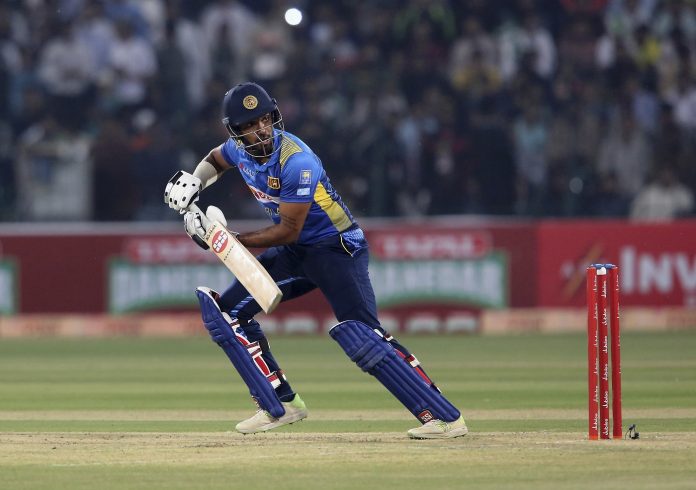 PESHAWAR: Sri Lanka defeated Pakistan in the first match of the three-match T20 series by 64 runs at the Gaddafi Stadium in Lahore on Saturday.

Sri Lanka after being put into bat scored 165 runs for the loss of five wickets. Gunathilaka was the pick of batsmen for Sri Lanka who scored 57 runs, while Fernando scored 33 and Rajapaksa scored 32.

For Pakistan Mohammad Hasnain took three wickets, which was a hat-trick, and Shadab Khan took one wicket. Hasnain became the youngest bowler to secure a hat-trick in a T20.

Pakistan collapsed miserably when they came to bat and none of batsmen could play with authority and they were all out on 101 runs.

Iftikhar Ahmed was top scorer with 25 runs, while captain Sarfraz Ahmed scored 24. Umar Akmal and Ahmed Shahzad, who came back into the team after a long break, were out on zero and 4 respectively. Their inclusion into the playing eleven was surprising for some cricket experts as in-form Fakhar Zaman and Haris Sohail were made to sit out for them.

Pradeep and Udana took three wickets each, while De Silva took two wickets and Rajitha took one wicket. Gunathilaka was declared player of the match for his brilliant batting. “It was a great win for the unit, and we did well in the one-dayers as well. Avishka batted well and it helped me a lot. When we go forward, we can win more games,” he said after the match.

With Saturday’s victory, Sri Lanka have gained 1-0 lead in the T20 series.

Sri Lankan captain Dasun Shanaka said it was great achievement for his team without some main players.

Defeat from eighth ranked second-string Sri Lankan team has put top-ranked Pakistan in a soup and they will think hard about their team combination in the next game which is scheduled at the same venue tomorrow (Monday). Runs were not easily coming by in the second innings, which means that Pakistan misread the pitch while deciding to field first. Some experts believe that Pakistan took Sri Lanka lightly by not including the best eleven in the team and experimenting too much. Umar Akmal, Ahmed Shahzad and Faheem Ashraf will be under pressure to keep their places in the playing eleven in the next match.