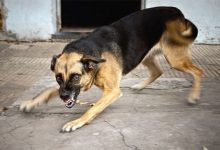 PARACHINAR: Four stray dogs struck terror in a bordering village of Kurram tribal district after bitting 18 people including a woman before they were shot dead on Monday, health officials confirm.

The officials said that four stray dogs entered Pewar village located on Pak-Afghan border and bitten 18 people including a woman and children.

“I have seen four dogs entered the village and when they came closer they attacked me,” said 12-year old Abbas who was also injured. The stray dogs attacks created panic among the locals after which announcements were made from village mosque asking people to stay home until all dogs are killed.

Locals took weapons and killed all of the dogs. The injured were shifted to the District Headquarters Hospital from where they were referred to Peshawar due to shortage of vaccines.

Several persons were injured after a stray dog attacked them in a remote village in Dera Ismail Khan who were also shifted due to shortage of rabies vaccines in hospitals throughout the district.