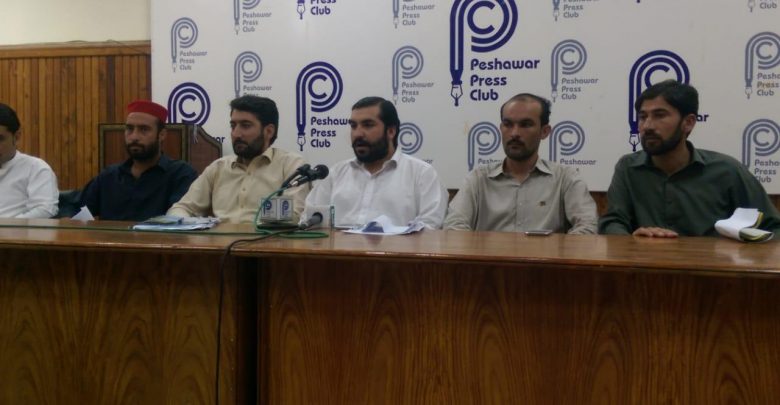 PESHAWAR: Muttahida Tulba Mahaaz (MTM) on Wednesday announced sit-in against alleged corruption and hike in fees at University of Peshawar .

The administration is trying to deprive thousands of deserving students of their basic constitutional right to education by making it difficult especially for their their poor parents to afford their children’s expenses.

“How parents will pay when their total monthly income is lower than the semester fee of the university, how will he pay his hostel fee that is much higher then what they earn,” said Khan, adding that how poor parents would afford their children’s transport, food and other necessary expenses.

The MTM had staged a 16-day sit-in against hike in fee which was called off after former provincial minister and the incumbent speaker Mushtaq Ghani promised that the university would increase fee upto 10 percent.

Now the government as well as the university have reneged on its promise, he said, adding that the administration has turned the university a no-go area for students.

“There are 330 police and 174 Khyber Force personnel have been deployed at the university apart from hundreds of university’s own security guards,” Bilal Khan said.

He added that a retired colonel was hired as security chief who is being paid over half a million salary besides accommodation, transport, oil, health, education and other allowances.

“UoP administration is charging 100 percent higher as compared to other public sector universities of the province,” he said.

Talking about irregularities in appointment, MTM head said that junior officers were appointed with hefty salaries on higher posts while there are hundreds of teachers who were given additional charges for which they were being paid double salaries. “A massive embezzlement of public money is underway with impunity and there is no one to hold them accountable,” he maintained.

He also criticized the government, judiciary and Higher Education Commission for its silence over the rampant harassment incidents being taking place in the university and demanded action with termination from services of the involved professors and officials. They warned to expand their protest to across the province if they were stopped or baton charged.

Meanwhile, students of Bacha Khan University Charsadda staged a protest against shortage of teaching faculty at all departments. The protesting students said that they two months have passed since the university has completed admission but their classes are yet to start. They threatened to block Motorway for traffic if teachers were not hired.