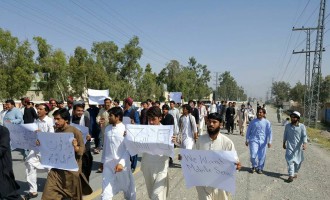 WANA: Hundreds of students in South Wazirsitan Agency’s headquarters Wana took to roads and demanded resumption of mobile and internet services in the agency.

Studens of Wana Degree College and private schools have taken out a protest march and blocked Wana-Azam Warsak Road for traffic as protest agaisnt suspension of Internet and mobile phones services in the area.

The protesting students were holding bannersa and placards inscribed with demands regarding resumption of the services.

“It seems that we still have been living in 20th century as we either send letters or to travel to Bannu to contact our relatives,” said Azam Wazir, a student.

The services have been suspended since 2010, the protesters said, adding that peace has returned completely to the agency therefore the authorities should restart the services.

They threatened to boycott their classes if their demands were not fulfilled. Political administration of Mohmand Agency has restored the services in the agency two days ago.