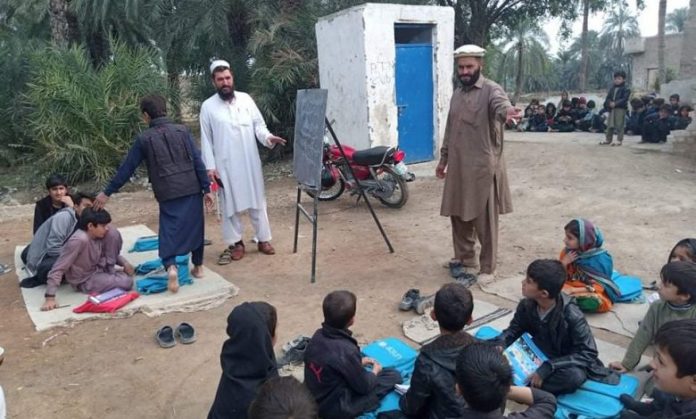 The building of the school was destroyed during military operation Zarb-e-Azb against the militants and it could not be reconstructed since then. Local people said about 200 students are enrolled in the school. There is no washroom or sitting place for the children inside the school.

Hussainullah Dawar, a Certified Teacher (CT) at the school, said while talking to TNN that there are only two chairs for teachers and only one blackboard for the whole school. He said the school lacks basic facilities due to which the students and teachers face difficulties.

Executive Engineer Malik Rahimullah Dawar visited the school on November 14 and expressed disappointment over its condition. Despite so many difficulties, the school teachers are performing their duties efficiently and they are continuing academic activities. Rahimullah said the students of the school are intelligent and teachers are also working hard, but they are not getting basic facilities for unknown reasons. He said it is even more disappointing that the monitoring team of the Education Department has also turned a blind eye towards the situation.

According to Education Department, there are a total of 909 schools in North Waziristan, including 479 boys schools and 421 girls schools. As many as 70,363 students are enrolled in these schools. In the military operation Zarb-e-Azb, as many as 54 schools were completely destroyed, while 147 were partially damaged in the tribal district. Most of the damaged schools have been reconstructed, while work on others is continuing.

The area elders and people have called upon the district education officer and deputy commissioner to take notice of the poor state of the school. They have demanded immediate reconstruction of Government Boys Primary School Noor Ayaz Kot Haiderkhel and provision of facilities at all schools. They said there is already a shortage of educational institutions in North Waziristan and existing institutions are facing the problem of lack of facilities. They said good facilities at schools will ensure bright future for students.