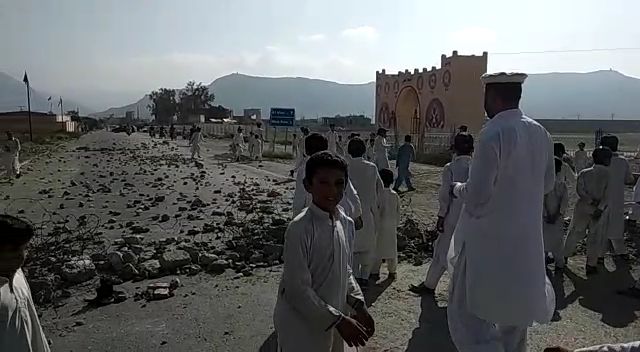 WANA: The students of government high school in Wana sub-division of South Waziristan tribal district on Saturday staged protest against the staff of the District Headquarters Hospital.

All the entry and exit routes of Wana Bazaar remained closed during the protest of the students. The protesting students gathered outside Scouts Camp and chanted slogans against the hospital administration. They said their ailing teacher Khair Muhammad was taken to hospital where he died as he did not receive proper treatment due to unavailability of doctors.

A teacher of the school told TNN that Khair Muhammad fell ill on Friday after which he was taken to Wana Hospital.

“When we reached hospital, there was no doctor or nurse to provide treatment to the ailing teacher. Khair Muhammad did not get treatment and died,” the schoolteacher told TNN on condition of anonymity.

He said Khair Muhammad remained at the hospital for three hours and ultimately died on floor of the hospital. He said the protest will continue till the government takes action against the negligent staff. They said they are holding protest because of the highly irresponsible behaviour of the hospital and they will not end protest till action is taken against responsible officials.

The protesters demanded filing of case against medical superintendent of the hospital. They also called upon District Police Officer (DPO) Attiqullah to take notice of the matter and take action against officials responsible for Khair Muhammad’s death.

Police said the DPO has taken notice of the matter and ordered registration of a case against Medical Superintendent Dr Jehanzeb.

Earlier, during a survey, TNN found that the only health facility in tehsil Ladha of South Waziristan is lacking proper medical staff, medicines and other basic healthcare facilities, adding to the miseries of patients in the area.

In a model health facility hospital, labour room, operation theatre and laboratory are available, but no trained doctors are available in Ladha Hospital to provide quality healthcare. There is 35-member staff in Ladha Hospital, but they are not only lazy in performing their duties but also not enough to cater to the requirements of the growing number of patients. Local people informed that on daily bases almost half of the staff remains unavailable, leaving the patients dependent on unskilled doctors of private clinics.