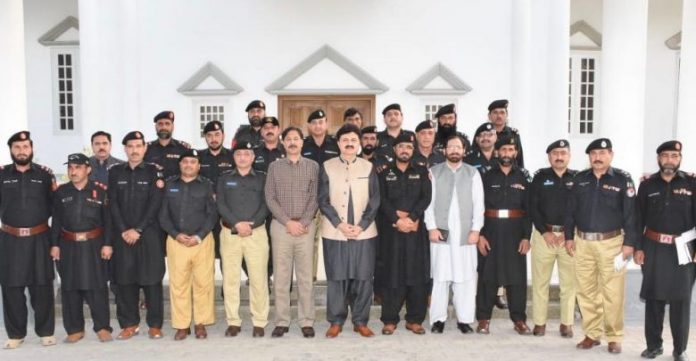 PESHAWAR: The protesting Khasadars and Levies forces have agreed to end the 20-day long protest camp after the committee appointed by chief minister ensured them that all their demands will be addressed under the law and constitution of the country.

The committee led by Ajmal Wazir, advisor to chief minister on tribal districts, informed them that Pakistan Tehrik-e-Insaf government will protect the rights of twenty-eight thousand paramilitary forces. Praising their services in the maintenance of peace and security in tribal districts, Ajmal said that they’ve rendered numerous sacrifices against the militancy which will never be forgotten by the government.

During the meeting, it was agreed that both the parties will solve all their issues through mutual talks in the light of law and constitution. Wazir informed the khasadars and levies forces representatives that they will not be made jobless and the government will protect their rights.

The assurance was made during the meeting of committees members formed by the Khyber Pakhtunkhwa apex committee, under Ajmal Wazir to meet to the protesting Khasadar and levies men and quell the unrest.  All the committee members participated in the meetings and extended supports to the Khasadars and Levies men for the protection of their rights.

The Khasadar and Levies forces from all seven tribal districts and six sub-divisions are in protest against the government believing the after the extension of police system to tribal districts, they will be rendered jobless. They are asking the government to notify their job structure and provide them with incentives and salaries at par with the KP police.

They have also rejected the two ordinances signed by Khyber Pakhtunkhwa Governor Shah Farman on regarding their legal status. The personnel of the two forces established a protest camp at Bab-i-Khyber in Jamrud to press the government for acceptance of their demands.