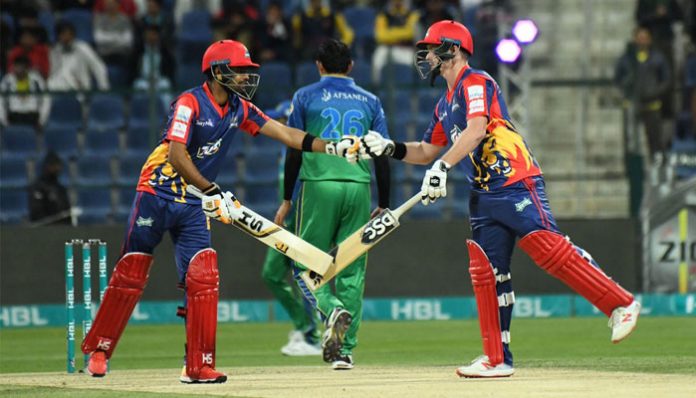 PESHAWAR: Multan Sultan became the first team to make exit from the fourth edition of the Pakistan Super League (PSL) as Karachi Kings defeated them by five wickets in 24th match of the event in Abu Dhabi on Monday.

Sultans after put into bat first were restricted to 118 for the loss of seven wickets due to disciplined bowling by Karachi Kings. Hammad Azam was top scorer with 29 runs, while captain Shoaib Malik scored 26. Sultans score summed up the sorry tale of their batting throughout the tournament, although they had some good bowlers in their ranks.

Usman Shinwari was the pick of blowers for Kings with four wickets, while Umer Khan took three wickets.

Although, Sultans bowlers managed to take the game to the last over, but that only delayed the inevitable and Kings won with five wickets intact. Livingstone top scored with 53, while Ingram scored 31. For Sultans, Mohammad Ilyas took three wickets, while Mohammad Abbas took two wickets.

Usman Shinwari was declared player of the match for his brilliant bowling. The win also meant that the hopes of Karachi for moving into the playoffs are still alive.

In an earlier match of the day, Quetta Gladiators eased past Peshawar Zalmi to book place in the playoffs.

Zalmi after being put into bat first scored 165 runs for the loss of four wickets. Kamran Akmal was top scorer with 72 runs, while Pollard scored 44.

Gladiators did not waste much time and reached the target in 18th over with eight wickets intact. Shane Watson again impressed with his unbeaten 91, while Ahmed Shehzad also scored 50.

For Zalmi, Sameen Gul and Umaid Asif took one wicket each. Watson was declared player of the match.

Two matches will be played in the PSL-4 today (Tuesday). In the first match, Lahore Qalandars will face Peshawar Zalmi at 4:30pm (PST), while in second match, Islamabad United will face Quetta Gladiators at 9:00pm (PST).