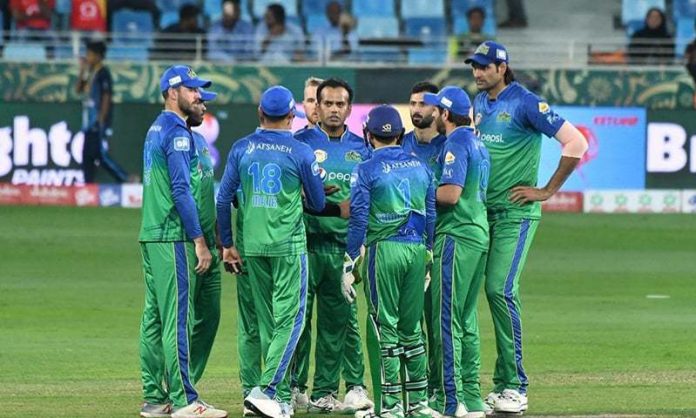 PESHAWAR: Multan Sultans defeated Islamabad United by six wickets in a match of the Pakistan Super League (PSL) at the Dubai International Stadium on Tuesday night.

Multan Sultans captain Shoaib Malik opted to field first after winning the toss at a good-looking pitch keeping in view the dew factor. United led by young Shadab Khan were all out on 121 in the 18th over due to brilliant bowling by Sultans bowlers. Luke Ronchi was top scorer with 32 runs, Asif Ali scored 22 and Samit Patel scored 20.

It was a smooth sailing for Sultans in the chase as they surpassed the target with six wickets and 11 balls to spare.

Umar Siddiq was top scorer with 46 runs, James Vince scored 28, while skipper Malik scored 23 runs. Daniel Christian also played a little cameo of 16 runs to take the team over the line. Islamabad United were also let down by some dropped catches.

Sultans had made two changes in the team on Tuesday as Nauman and Evans were included in place of Hammad Azam and Green. Daniel Christian was declared player of the match due to his brilliant all-round performance.

After Tuesday’s match, Sultans jumped to fourth place in the points table with four points and leap-frogged Karachi Kings and Lahore Qalandars who also had four points, but low run-rate. Quetta Gladiators are still leading the chart with eight points, followed by Peshawar Zalmi and Islamabad United with six points each.

Two matches will be played in the PSL-4 today (Wednesday). In the first match, Lahore Qalandars will face Quetta Gladiators at 4:30pm (PST), while in second match, Islamabad United will face Karachi Kings at 9:00pm (PST). Lahore and Karachi will be particularly in pressure to raise them from bottom of the points table.

Meanwhile, Peshawar Zalmi did some adjustments in the team after Dawid Malan and Chris Jordan were called up for the national duty as they have been included in the T20 squad for series against West Indies. Zalmi have called up Lendl Simmons and Tymal Mills as replacements.