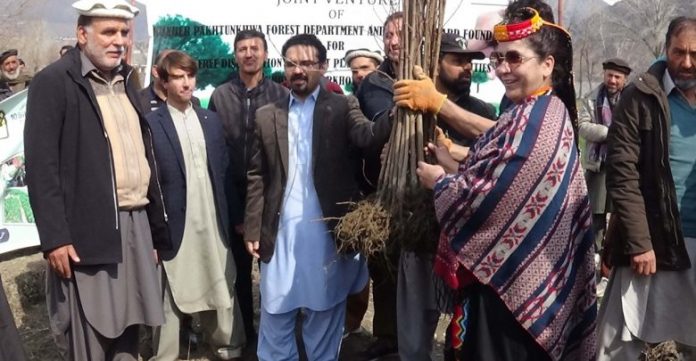 CHITRAL: The Forest Department of Chitral is distributing free of cost saplings among the people under the 10 Billion Tree Tsunami program of the federal government.

A ceremony in this regard was organized at a nursery in Singor area of Chitral on Friday. On the occasion, the Forest Department provided free of cost saplings to Snow Leopard Association. The officials of Snow Leopard Association will dispatch these plants to upper areas of Chitral and distribute among the community members for plantation. The Association will bear all the expenses of transportation and training to local community members about plantation campaign.

The plantation campaign will be carried out in Torkhao and Molkhao areas to address the issue of deforestation, shortage of wood and overcome the challenge of climate change. The Snow Leopard Association representative Shafiqullah Khan said while talking to TNN that besides snow leopard, all the wildlife is integral component of forests.

Divisional Forest Officer (DFO) Shaukat Fayyaz said the shortage of forests can be overcome by implementation of ‘one man one plant’ formula. He said the situation can improve drastically if every person plants at least one tree. He said growing more trees is the only answer to reduce the impact of climate change.

Shafiqullah vowed to involve community in planting maximum trees in Chital and make the district a role model for other districts to follow. He said forests in Chtiral were damaged due to tree-cutting which damaged the environment and wildlife also suffered. He said plantation of maximum trees is the only solution to environmental issues.

People in Chitral use forest wood for domestic use to keep their houses warm during winter and cooking purposes. The problem can be overcome if the government provides cheaper electricity or other means of fuel like gas.