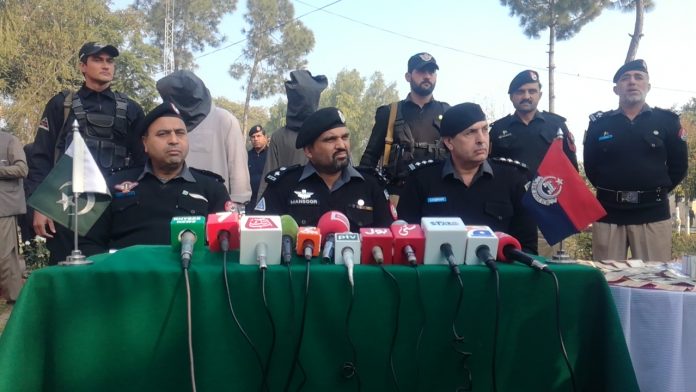 NOWSHERA: Nowshera Police has arrested the alleged rapist and killer of eight-year-old Manahil within three days of the heinous incident.

The police presented the alleged culprit, identified as 22-year-old Yasir, before the media on Tuesday. Deputy Inspector General (DIG) Mardan Muhammad Ali Gandapur while announcing the suspect’s arrest at a press conference said Yasir has been arrested after his DNA sample matched with the samples taken at the crime scene. He revealed that Yasir is a friend of the victim girl’s father and he was arrested from his home during a raid. He said the culprit has confessed to his crime. The DIG said 20 suspects were interrogated in connection with the case and over 200 DNA samples were taken to trace the killer. He said due to intense efforts and investigation, the police arrested the main suspect within three days of the incident.

KP Information Minister Shaukat Yousafzai, who was also present at the press conference, appreciated the performance of the Nowshera Police for arresting the culprit within three days. He said the KP Police is a professional force which is working free of any influence to perform its duties. The minister said the KP government will soon introduce a bill in the provincial assembly for bringing tougher sentences for culprits involved in such heinous crimes. Shaukat Yousafzai also appealed to parents to observe caution while sending their children out of home. He said combined efforts are needed to eradicate the menace of sexual abuse of children, which he earlier termed as a bigger menace than terrorism.

Manahil’s father Shah Said had told media that his daughter went outside her home in Kalan area of Nowshera to attend the class of the Holy Quran four days ago, but did not return home. The principal of the religious seminary sent Manahil along with another girl to her daughter’s home to deliver some foodstuff, after which she went missing. The clueless family after extensive search for the girl failed to find her and lodged a report with police.

A week earlier, a three-year-old girl, Faryal was also killed after sexual abuse in Havelian and police are yet to trace the culprits behind the gory incident.

Shaukat Yousafzai, when asked about the progress in the case of Faryal, said he is hopeful that the police will arrest the killer soon as they did in Nowshera. He said justice will be provided to the victim family at all costs.