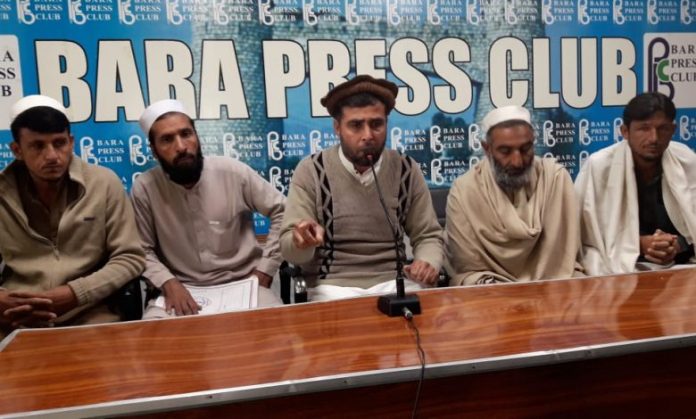 BARA: The suspended Levies and Khassadar personnel in Bara have announced that the suspended personnel of Khyber and Mohmand tribal districts will boycott the polio vaccination campaigns till their restoration.

Addressing a press conference at Bara Press Club on Tuesday, representative of sacked Levies and Khassadar personnel Arbab Khan Afridi along with other colleagues said the government had committed their economic murder and they children are starving since they have been suspended from jobs. They said a total of 250 suspended Khassadar and Levies personnel have not been restored yet. He said although their 750 other colleagues have been restored, but 250 former personnel are not being restored due to unknown reasons.

Arbab Khan Afridi alleged that the suspended Khassadar and Levies personnel are being subjected to discriminatory attitude. He said the higher officials are employing different delaying tactics to keep them out of the job. He said fake promises are being made with them for the last 11 years that they would be restored, but nothing has happened practically.

Arbab Khan Afridi said the apathy of the Khyber Pakhtunkhwa government towards the resolution of the issue shows that its structure is empty from within. He lamented that the elected representatives from their area are also powerless and they cannot anything for the suspended Levies and Khassadar personnel. He said the performance of the local representatives is restricted to statements only.

The press conference came a day after the Khassadar personnel of Mohmand district staged protest demonstration against non-payment of salaries.

The protesting Khassadars marched from Khyber Pakhtunkhwa Assembly towards Peshawar Press Club and chanted slogans against the government and district administration of Mohmand.

The protesting Khassadars said the issue of salaries must be resolved without further delay and their other problems must also be resolved according to promises made by the chief minister. They said action must be taken against those who are ‘looting’ the salaries of Khassadars.

On the other hand, the members of the Khassadar and Levies forces who were suspended from their service in Bara are still waiting for their restoration.

Last month, the suspended Khassadar and Levies personnel staged a protest demonstration outside Bara Press Club in favour of their demands.