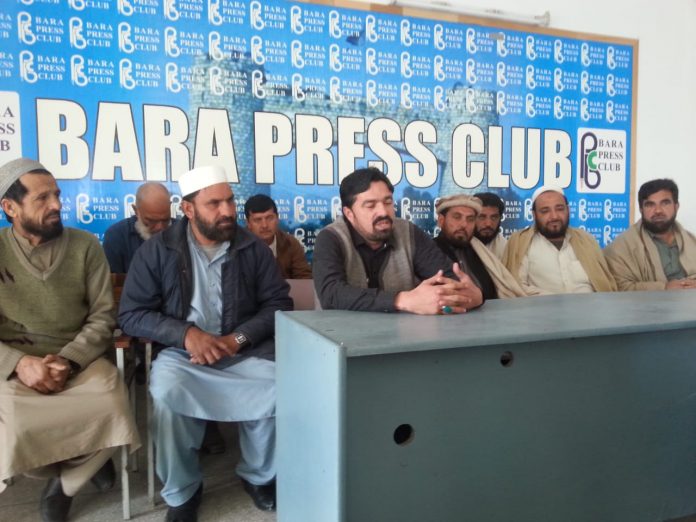 BARA: The suspended employees of Khassadar force in Khyber tribal district have demand the government to restore them on their jobs.

Addressing a press conference at Bara Press Club on Sunday, the suspended officials said the government had suspended 715 Khassadar personnel in Khyber tribal district due to law and order issues in 2009.

Abidullah said the Khassadars of Khyber tribal district submitted all the necessary documents and applications, but they were not called back for their jobs. He said he and his colleagues from the tribes of Khyber district are still waiting for resuming their duties and the commission formed for the restoration of Khassadars hasn’t taken up their case properly.

The suspended Khassadars alleged that those having influence have been restored on their jobs, while those having no influence or reference are still waiting for resumption of their jobs. They said they have also approached Member National Assembly Iqbal Afridi, but he hasn’t been able to extend any help to them so far.

The demand of suspended Khassadar personnel for restoration came at a time when serving Khassadars are demanding merger with Khyber Pakhtunkhwa Police and all facilities and privileges equal to them.

Few days ago, Khassadars from the tribal districts said at a news conference in Peshawar that they will stage a sit-in in Islamabad if their demands were not accepted.

All Fata Khassadar Force president Syed Jalal Wazir and others said Khassadar force had 100 years services in the former tribal areas and had supported the merger with KP, but their future was now uncertain.

Jalal Wazir alleged that various officials of the force were forcibly removed from service that had created unrest and disappointment among the Khassadars. They said they offered countless sacrifices for Pakistan, and in return they are facing uncertain future now. He demanded the prime minister to honour his commitment and merge Khassadar force with KP Police.