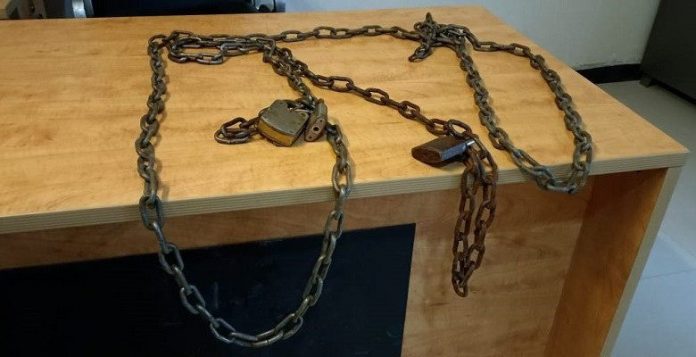 SWABI: Swabi Police have rescued a woman who was allegedly chained by her four brothers to stop her from doing job.

Deputy Superintendent of Police (DSP) Bashir Yousafzai said while talking to TNN that the police received information that a woman had been chained by her brothers in Deha Darra area to stop her from doing job. He said he sent a police team including women personnel to investigate the issue.

Bashir Yousafzai said when the police team arrived at the house, a woman was found chained in a room. The length of the chain was up to the washroom and the woman could not walk beyond that. The women told police that she was chained by her brothers. The DSP said the woman’s three brothers, Sair Khan, Faheem Khan and Nadeem Khan were arrested from their home, while her fourth brother escaped.

The police officer said the woman was divorced and she had a son and a daughter, and she wanted to do a job to make ends meet. However, this was not acceptable to her brothers. The woman has been shifted to Darul Aman in Mardan and further investigation is underway. The arrested accused will be produced in the court today (Wednesday).

The women protection law was approved in Khyber Pakhtunkhwa in 2021, but rights activists complain that this is not being implemented in letter and spirit.

Shabeena Ayaz, a member of Aurat Foundation, said while talking to TNN that the cases of violence against women are increasing due to non-implementation of the existing laws for their protection. Under the law, those found involved in violence against women may face imprisonment up to five years and fine. The law provides that district-level committees will be formed which will look into complaints of women. The committee will try to resolve the issue and also provide legal assistance to victims. The law binds the courts to announce verdict in cases related to violence against women within two months. Those violating the court ruling will face further imprisonment of one year and Rs300,000 fine.

However, Shabina Ayaz said such committees are yet to be formed in many districts. She said delayed verdicts by courts embolden those who commit violence against women.

According to statistics shared by KP Police, incidents of violence against women increased three times from 2018 to 2019.