SWAT: The road leading to Kalam from Swat has been blocked due to land sliding after heavy rain in the valley.

The local police said the land sliding occurred in Cham Garhi area where a huge land peace fell on the road. Large queues of vehicles were witnessed on both sides of the road after land sliding. 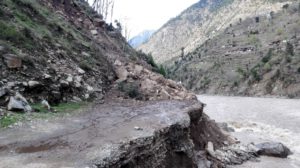 The area people said the district administration has not taken any step for opening the road, and no government official has visited the site so far.

They demanded the government to clear the road immediately as people on both sides are facing difficulties due to this situation.

Rain spell is also continuing in Chitral for the last over 30 hours after which the district administration has issued alert and asked the relevant departments to remain prepared for any challenging situation.

Officials said that road in Garam Chashma has been closed due to land sliding. Officials of the Construction and Works Department have been sent to the area to open the road.