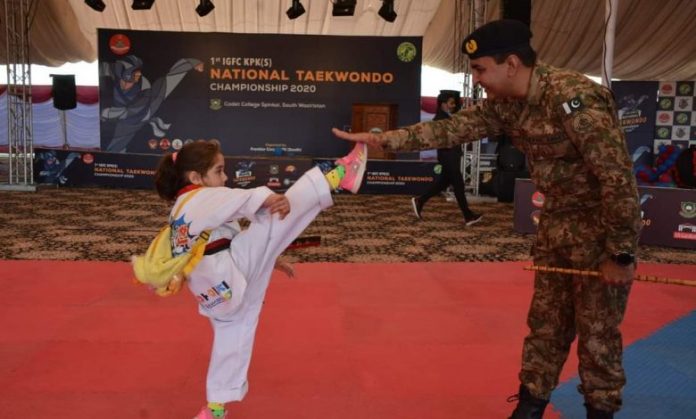 The inauguration ceremony was arranged at Spinkai Raghzai Cadet College in South Waziristan which was attended by a large number of tribal elders, civil and military officers, students and taekwondo players.

On the occasion, the students of different schools sang national songs and performed traditional “Attan” dance. The taekwondo players also displayed different martial arts skills which were greatly appreciated by participants and spectators.

Speaking on the occasion, the chief guest appreciated the role of Mehsud, Wazir and Betani tribes for development and prosperity of the area. He said that there was no dearth of taekwondo talent in South Waziristan and first IGFC South Taekwondo Championship was organised as part of efforts to optimise this talent. He said the purpose of the event is to bring the youth towards positive healthy activities and tape their talent. He said there is immense talent in the youth of merged districts which must be tapped. He said the youth after excelling in the sport will then be able to perform in international level competitions and make name for them and the country.

The youth participating in the event said they are excited for the championship and determined to perform well. They said it will be a good platform for them to polish their skills and compete on even higher levels. They thanked the organisers for giving them a chance to prove their talent in the game.