However, several people in Mardan have complained that tailors have increased their rates to an extent that it has become impossible for the common man to get suit for the occasion. The tailors are charging money from Rs800-1,000 for sewing one suit which has caused concern among the people.

The local people told TNN that tailors are charging rates of their own choice and the poor people are finding it difficult to get a suit for Eid. They said the district administration should fix rates for tailors and ensure strict implementation of these rates to give relief to the people.

A citizen, Bashir told TNN that the prices of every item have increased as the Eid is coming closer.

“Tailors were charging up to Rs500 before Ramazan but today the tailor is demanding Rs800 for sewing my suit. No one is taking notice of the matter,” he said.

Imran, a businessman, said tailors are demanding higher charges for sewing his suit.

“Tailors are charging such rates that sewing the suit costs more than buying it. This is injustice with the poor people, who cannot get a suit even on the occasion of Eid. The rates should be brought down,” he told TNN. 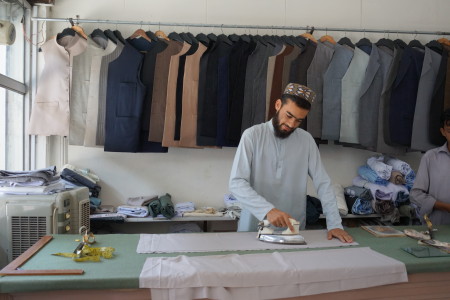 On the other hand, tailors are of the view that they have increased their charges after increase in the prices of items used in the sewing of a suit and use of generators due to prolonged power load-shedding.

“The prices of items used in our work have increased and we are also using generators due to load-shedding. Instead of earning the profit, we will suffer losses if we prepare suits on old rates in these circumstances,” said Ayub, a tailor in Mardan.

Another tailor, Shayan said they are also poor people like other citizens. He said tailors cannot afford to sew suits on old rates due to high rates of electricity, labour and other equipment.