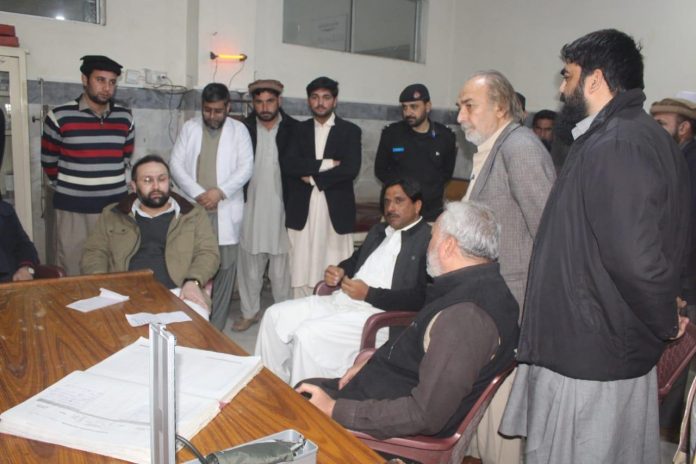 Secretary Health Dr Farooq Jamil and Adviser on Health Dr Jawwad Wasif also accompanied the health minister during his surprise visits. They also visited Category-D Hospital in Katlang. The minister expressed anger over absence of staff from duty and summoned the medical superintendent of the hospital to his office for explanation.

Hasham Inamullah said the equipment is available in the hospital, but the staff is absent. He said absenteeism on the excuse of lack of funds will never be tolerated. He said the proper management and cleanliness at the hospital need honesty and dedication, not funds. He said negligence in duty will not be allowed and he will personally visit every hospital in the province to correct the state of affairs.

The minister said an inquiry headed by the secretary of Health Department is being made against fake doctors. He said fake doctors will not escape punishment and they will be dealt with sternly.

The district administration and Wapda officials conducted a raid at District Headquarters Hospital Mardan and imposed Rs3 million fine on it over alleged power theft.

Medical Superintendent Dr Latif told TNN that he was not aware of the direct electricity connection in the hospital. He said the task of electricity at the hospital is handled by the lineman. He said power supply is available to the hospital without interruption. He confirmed that Rs3 million fine has been imposed on the hospital by the Wapda officials.

Sources said the Wapda officials also raided the office of the Municipal Committee and imposed a fine of Rs1.2 million on alleged power theft.