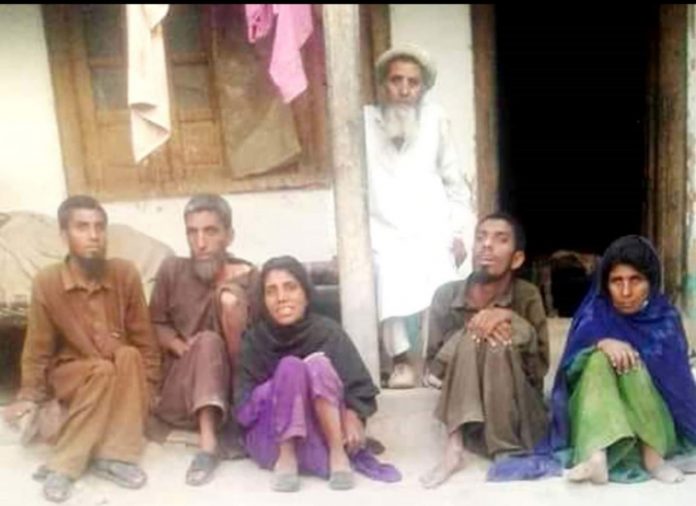 CHITRAL: A 75-year-old destitute person in Chitral is living a miserable life by looking after his five disabled children for the last 40 years, but the poor family hasn’t received the help which it deserves.

The elderly person, Syed Hameed, has five children who are all disabled by birth and they cannot speak or walk. Syed Hameed lives in Ashriat Union Council of Darosh tehsil. The poor man is a widower and he also fulfils the responsibility of cooking food for his children.

Syed Hamid said while talking to TNN that he used to work as a labourer when he was healthy and young, but he cannot do work in 75 years age. He said his eldest son Ahmed Hussain is 40-year-old. He said his daughter Sultan Mehal is 38-year-old, another daughter Noor Taj Mehal is 27-year-old, son Zaboor is 25 years old and youngest son Zerullah is 23 years old.

Syed Hameed said his is living a very difficult life as there is no one to support his disabled children. He said it is a matter of great disappointment for him that his family has not been included in the list of Benazir Income Support Program (BISP) beneficiaries. He said the names of Noor Taj Mehal and Sultan Mehal should have been included in the list of BISP beneficiaries. He said neither the government nor any non-governmental organisation or charity extended any kind of assistance to his family. He said his family is in dire need of help as all his children are disabled, he has no wife and it is extremely difficult for him to look after his children in the age of 75.

Syed Hameed said he worked hard to make ends meet and look after his children when he was in good health, but now he is 75-year-old and cannot do hard work to earn money. He said his family is living a very difficult life and they are in dire need of immediate help. He demanded the government and well off people to help him look after his family.