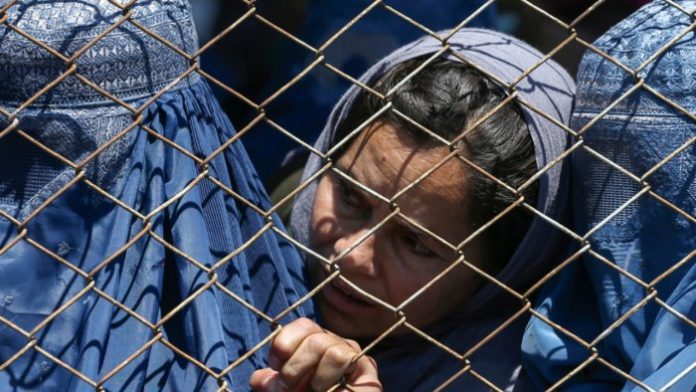 PESHAWAR: As Afghanistan is taken over by the Taliban and thousands of people are desperate to get out of the country, women are also concerned about their future.

Women in Afghanistan fear that their rights may be violated under the Taliban rule as was done earlier when women were confined to their homes when Taliban first time came into power.

Zeenat, a housewife in Kabul, said women were highly perturbed for the last few days as news about the Taliban takeover of different provinces were forthcoming, and now when they have taken over the entire country, women are not stepping outside their homes.

The 28-year-old woman said women used to go to educational institutions and shopping malls without any fear during the government of Ashraf Ghani, but they are not so confident of enjoying same rights under the Taliban rule. She feared that the Taliban won’t give rights to women.

Although the Taliban have assured that they would allow women to continue education and jobs if they are fully covered, but still Zeenat is sceptical about it as their previous rule increased poverty due to severing of diplomatic ties with rest of the world.

Women may take part in politics

The Taliban’s Qatar political office spokesman Sohail Shaheen said in a recent interview that under the new government, women would be allowed to take part in politics and they would not need a male relative to come out of house. However, rights and education activists are worried about losing their liberties.

Nobel Laureate Malala Yousafzai, who also survived a Taliban attack on her life, said she is worried about Afghan women and urged Pakistan to play a role for women’s education in Afghanistan.

Malala informed Federal Information Minister Fawad Chaudhry in a phone call about international concerns regarding women’s rights in Afghanistan, and said she had also written a letter to Prime Minister Imran Khan in this regard.

Qandi Safi, an Afghan woman who lives in Peshawar for last several years, said Afghanistan will change under the Taliban rule and women would be confined to their homes, they would not be allowed jobs and their pictures would be removed from everywhere.

“My sister in Afghanistan was doing job to feed her children as her husband had no job. Now she has lost her job and she is extremely worried,” Qandi Safi told TNN.

She said Taliban are currently behaving because the whole world is watching them, but people are fearful about them and they want to get out of Afghanistan as they know that the Taliban will repeat their cruelties once they get hold of all administrative affairs. She said a large number of journalists, particularly journalists, spent the night at airport trying to get out of Afghanistan, as they once stood with truth and now they fear repercussions.

Qandi Safi said she is extremely worried for Afghans who are stranded there and they will have to endure the Taliban rule again.

However, Qandi Safi and Zeenat are also hopeful that world pressure has forced Taliban to think about human rights, and no powerful country will recognise them until they rule with civility.