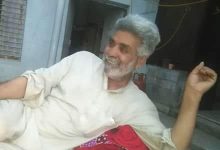 Zaida police said that the attackers shot Farooq Khan outside his house, adding that he was shot three times on his chest.

The attackers fled after committing the crime. Tahir Khan said that Farooq Khan died instantly while his colleagues escaped unhurt. Relatives and family members of the deceased say that he had no enmity with anyone. He was an active supporter of Pashtun Tahaffuz Movement.

Khan was the former president and former general secretary of PkMAP and was currently an activist of the party. No FIR had been registered by the time this report was filed.