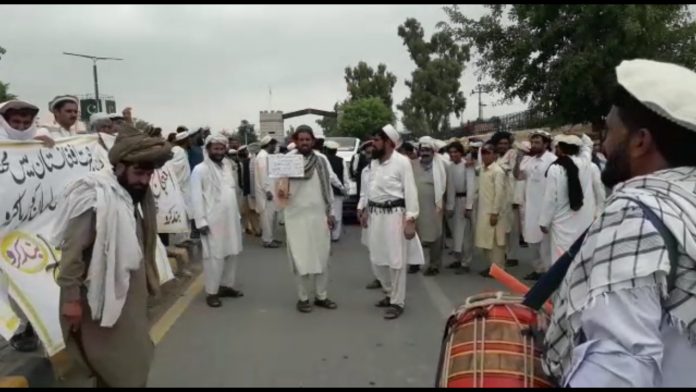 MIRANSHAH: The temporarily displaced persons (TDPs) of North Waziristan who have recently returned from Afghanistan, on Friday staged a protest demonstration in Miranshah in favour of their demands.

The protesting tribesmen said many people from North Waziristan tribal district had gone to Afghanistan during military operation Zarb-e-Azb and they returned after the conclusion of the operation against militants and return of peace to the area. They said the displaced persons returned through a legal procedure defined by the government, but they could not bring back their precious vehicles from Afghanistan.

The tribal elders said they also held many Jirgas over the issue, but no Jirga proved fruitful. They said the employment of some of the poor tribesmen is associated with the vehicles stranded in Afghanistan and they should be allowed to bring back their vehicles to end their difficulties. They said so far not even a single vehicle has been brought back to Pakistan and the owners of the vehicles have been left with no other option than protest.

The tribesmen demanded the government to allow them bringing back their precious vehicles by August 05. They warned that they will block the Pak-Afghan Highway for all kinds of traffic if their demands were not accepted. They said the highway will remain closed till acceptance of demands and the responsibility of any untoward incident during the protest will rest with the government.