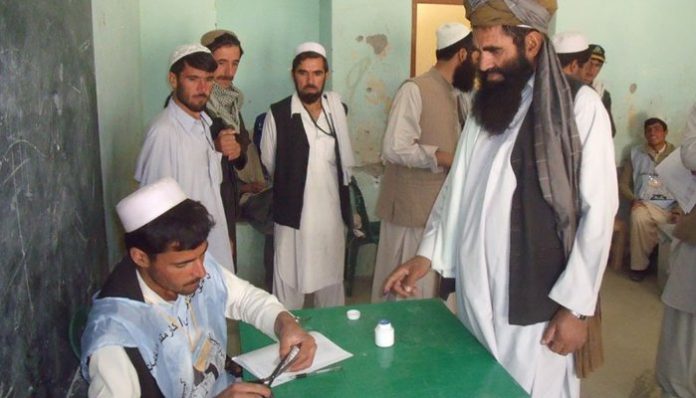 PESHAWAR: As the election campaign for the upcoming first-ever elections in tribal districts for Khyber Pakhtunkhwa (KP) assembly is geared up, a total of 15 candidates from different constituencies have withdrawn nomination papers, said the election commission of Pakistan.

A notification was issued by the ECP in this regard on Wednesday said that candidates have decided not to contest upcoming elections to be on July 20, 2019.

All the preparations of the tribal districts polls have been completed where a total of 28, 01,837 registered voters in tribal districts of erstwhile Fata would exercise their right of franchise to elect 16 MPAs for Khyber Pakhtunkhwa Assembly.

Huge banners and posters can be seen in all parts of tribal districts and big public gatherings and corner meetings are being arranged beside the door to door campaign by-election candidates. The withdrawal of nomination papers by 15 candidates is the party of surprising developments coming forth in the polls, with old foes becoming friends for political gains and rival candidates trading allegations and counter-allegations against each other.

The ECP has said that a total of 1897 polling stations have been set up for the smooth and transparent holding of elections in tribal districts. Separate polling stations have also been set up for women voters and it was announced that each constituency should have at least ten per cent women votes otherwise, election, on the constituency, would be declared null and void.