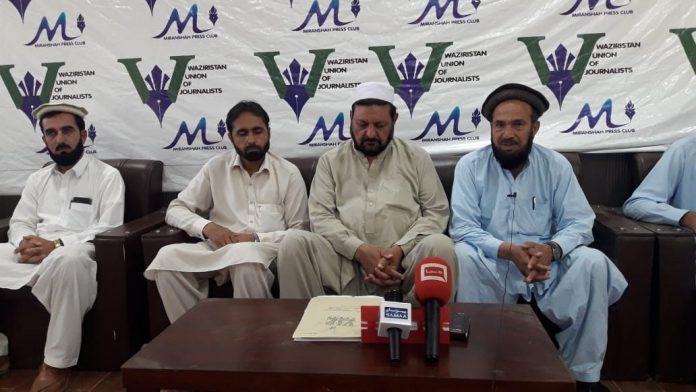 MIRANSHAH: All teachers association of North Waziristan on Monday staged protest against the arrest of three teachers and warned the government to release them otherwise they will boycott schools duties.

The protestors said that they are performing their duties responsibly and accused the present district administration of harassing school’s teachers in North Waziristan after the operation Zarb-e-Azb against militants.

“We can never tolerate the arrest of schools teachers,” said Aziz Dawar Chairman all Teacher Association, while addressing the protest gathering. “A few days ago three of our teachers were arrested without any reason or crime,” Dawar added that despite all efforts, they have not been released by the administration.

He warned that if they were not released by 9 am tomorrow morning, September 17, all male and female government schools in North Waziristan will be closed until the teachers are not released. He added that sit-in will not be avoided if the demands are not met on time.

Four persons, including students, were injured when a roof of a government school collapsed in Dera Ismail Khan on Monday. According to the administration, parts of the roof of Government Sentinel Girls’ School 1 were collapsed today, in which a teacher, Ishtar Bukhari, and three students sustained injuries. They were taken to hospital where they are stated to be out danger.

According to the school administration, many of the school’s classrooms are in a dilapidated condition, which is expected to cause further damage, if not repaired. After the incident, the EDO and DC also visited the school and inspected the school building.

According to correspondent TNN, the fall section of the Government Sentinel Girls’ School was created in 2016 and more than a thousand students are studying in the school. Sources say there are two parts to the school, the first one was built in 1916 but the old part is still better than the newly constructed part.