QUETTA, 17 November: Balochistan Chief Minister Nawab Sanaullah Zehri said on Thursday that the purpose of terrorism in Balochistan from other side of the border was to disrupt China Pakistan Economic Corridor (CPEC) and development process.

Addressing a security conference in Turbat, the chief minister said the government will take strict action against miscreants for protecting lives and property of its citizens. He said situation has improved in Balochistan now and the government will not allow anyone to create 2012 like situation in the province. Mr Zehri condemned the announcement of Balochistan Liberation Front commander for targeting Hasil Khan Bazenjo and Dr Abdul Malik Baloch.

The conference thoroughly reviewed the situation after the killing of 15 people in Turbat and decided to deal the culprits involved in the incident with iron hand. 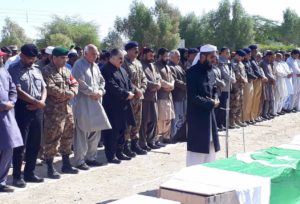 Meanwhile, Sanaullah Zehri, Commander Southern Command Lieutenant General Asim Saleem Bajwa, provincial ministers and other officials attended the funeral prayer of the slain 15 men in Turbat, who had come from Punjab. The bodies of the victims were sent to Lahore through a special plane.