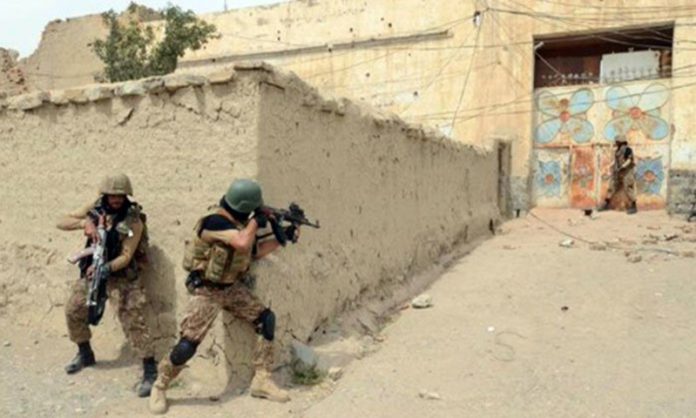 MIRANSHAH: The security forces have stepped up intelligence-based operations (IBO) in North Waziristan tribal district after increasing attacks by terrorists.

The latest IBO was conducted in Spinwam area of North Waziristan, the Inter-Services Public Relations (ISPR) said on Friday. The operation was conducted on the reported presence of terrorists.

During intense exchange of fire, one terrorist got killed. Weapons and ammunition were also recovered from the killed terrorist. The ISPR further said that a search operation was in process to eliminate any other terrorists found in the area.

Earlier in the day, a cross-border attack was reported from North Waziristan, in which a solider sustained injuries.

The attack in North Waziristan happened a day after a soldier was martyred in a cross-border attack on a military check post in Lower Dir.

According to ISPR, terrorists from inside Afghanistan across the international border opened fire on a military post in Lower Dir. One soldier identified as Havaldar Gul Ameer, got critically injured and later embraced martyrdom while under treatment at a hospital.

The ISPR said the security forces responded in a befitting manner, killing one terrorist. It said intelligence intercepts showed that one terrorist was killed and two to three were injured.

On August 21, a terrorist was killed in an IBO in North Waziristan.

According to ISPR, the security forces launched an IBO in the Boya area. During the exchange of fire, one terrorist was shot dead. The ISPR said arms and ammunition were also recovered during the operation.

On August 12, one terrorist was killed and another was arrested during an operation by the security forces in Sra Rogha area of South Waziristan.

The ISPR said that during intense exchange of fire, one security personnel embraced martyrdom. The ISPR said the arrested terrorist revealed that they had planned to conduct a fire raid on a military post. The martyred soldier was identified as Naik Ziauddin, hailing from Mardan district.