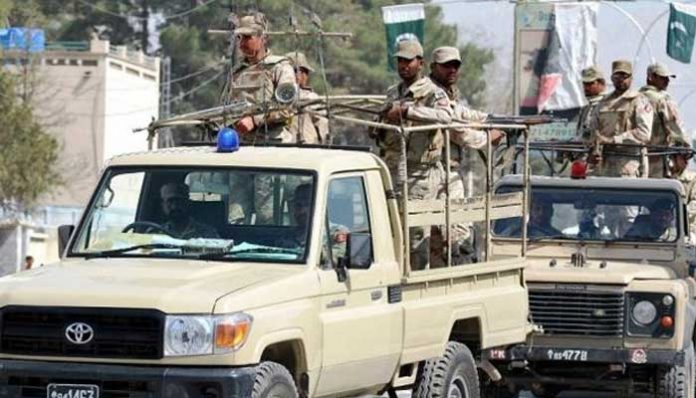 PESHAWAR: A terrorist was killed and weapons were recovered in an intelligence-based operation in North Waziristan tribal district on Friday.

According to a short message received from the Inter-Services Public Relations (ISPR), the IBO was conducted under Operation Raadul Fasad on a suspected hideout of terrorists in Barkelay village in tehsil Spinwam of North Waziristan. One terrorist was killed in the operation while IED (improvised explosive device) making literature, SMG, hand grenades, spare magazines and communication equipment were also recovered.

Three militants, reportedly belonging to Daesh, were killed in an explosion in Khar Tangi area of North Waziristan four days ago.

According to sources, there were differences between the militant groups due to which one of the group planted the explosives to kill the local commander. Infighting among militant groups is a known phenomenon in the tribal districts.

In another IBO in Balochistan, the Frontier Corps (FC) recovered arms and ammunition in a raid in the suburbs of Qilla Saifullah district and Kahan near Mawand. The weapons were likely to be used in some sabotage activity in the province. Hence by timely action, the security forces foiled a terror plan in Balochistan.

Three days ago, the security forces foiled a terror attack on the FC training centre in Balochistan’s Loralai district and killed four terrorists who wanted to enter the centre and cause massive damages.

The ISPR said four soldiers also lost their lives in the attack. The terrorists were denied entry at the entrance of the compound, where they resorted to indiscriminate firing and one of them exploded himself. The ISPR said the timely action by the security forces denied entry to militants to the residential area where casualties could have been on much higher side had the militant entered there. The deceased soldiers were identified as Subedar Major Munawar, Havaldar Iqbal Khan, Havaldar Bilal and Sepoy Naqshab.