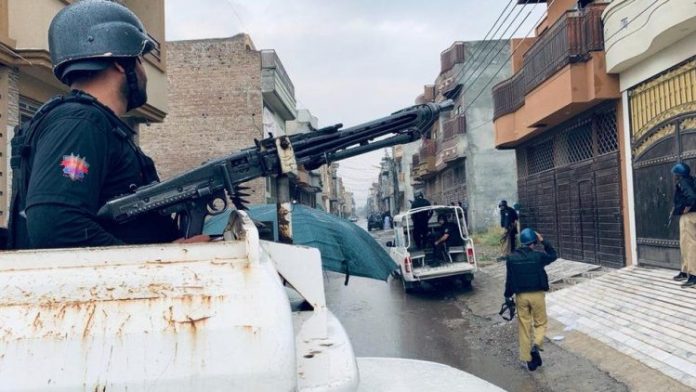 PESHAWAR: The Counter Terrorism Department (CTD) has issued details about the last week’s operation in Hayatabad area of Peshawar in which five terrorists, a policeman and a soldier lost their lives.

According to details issued by the CTD, the terrorists killed in the operation were involved in several terror acts and they were making planning for more such attacks. The forensic report of the arms recovered during the operation showed that it was used in attack on the Peshawar High Court Judge Justice Muhammad Ayub Khan in Hayatabad.

The report revealed that mobile phones, drone cameras, equipment used in suicide jackets were recovered in the operation which indicated that they were planning more attacks in the city. Investigation from the arrested terrorist showed that they were planning to target a public rally. This was verified from the mobile phone data and videos in the mobiles of the slain terrorists. It said police and law enforcement agencies thorough their effective action foiled the planning of terrorists.

The CTD said the terrorists killed and arrested during the operation belonged to an organised terror outfit. It said the group was involved in terror attacks in Hayatabad in 2017. These terrorists had obtained the house through fake documents and had also arranged a suicide bomber, Imran Afghani, and an improvised explosive device to execute their next plan.

The report said the intelligence agencies were tracing this group from 2017. Police received credible information about presence of terrorists in a house and raided the house, but terrorists hiding there opened fire. Two security personnel and five terrorists were killed in the exchange of fire. The slain terrorists were identified as Amjid Ali, Usman, Murad, Feroz Shah and Imran Afghani.

Meanwhile, police claimed that a terrorist, who escaped in injured condition during Hayatabad operation, has been arrested.

Capital City Police Officer Qazi Jameelur Rehman said at a press conference that the injured terrorist, Saeed was interrogated by the CTD. He said important revelations are expected during interrogation from the arrested suspect.