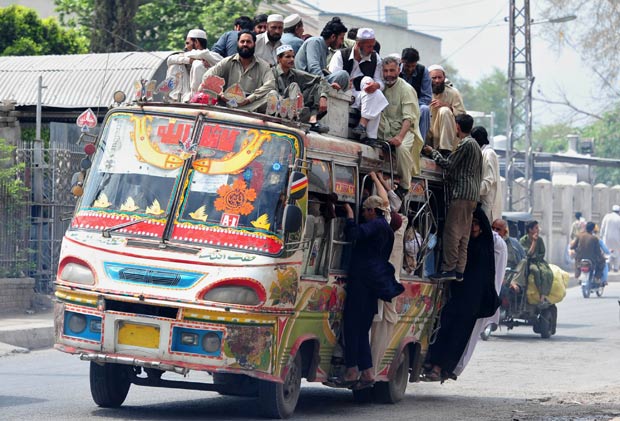 PESHAWAR: Transport services enable people to travel from one place to another for jobs, social interactions, recreational trips, and sometimes to the hospitals.

During COVID-19, transport businesses also faced a huge setback due to restrictions imposed by the government on travel. Taking advantage of the situation, the business of rented cars flourished, with drivers demanding the passengers double or triple the real fares for travel. People had no option, but to pay hefty fares to reach to their destination.

The public transport vehicles demand higher fares before and after lockdown to cover the loss. Also, high fares are demanded at night time.

Afzal, a driver at the Haji Camp bus terminal, said while talking to TNN that drivers are mostly the poor people, and it’s very hard to drive the coach all day.

“But I always come to the bus stand and get my number. Here the fares are also fixed. Everyone is obliged to pay the specified fares and no one argues. Just we have to pay some money to the stop manager who gives us the ticket,” he shared.

Afzal explained that he or any other driver on the stand did not increase the fare on their own, rather it is finalized by the terminal manager after consultation with the vehicle owners and drivers.

“We only increase the fare at our end when there is a lockdown and we drive at risk of being handed a challan, and at night time when we have fewer riders and we have earn the amount at least near to our daily wage,” he said.

A local coach driver, who bypasses the main terminal, said, “We ride the vehicle tirelessly all day and have local riders that get down at random places, therefore if we facilitate them and demand little extra fare, it is right. Also, the people argue a lot. If we demand the right fare they give us less than that, hence we demand more, so that they at least give us the reasonable fare.”

While analysing the whole situation, the balance seems missing between the passengers and the transporters. It can be turned right by knowing and remembering the true teachings of Islam.

Allah’s Messenger Prophet Muhammad (PBUH) said: “Pay to the laborer his wage before his sweat gets dry.”

The vehicle drivers are laborers who work hard every day to take people safely from one place to another and earn a daily wage for feeding their families. One should give them what they deserve at least, without getting angry, misbehaving, or treating them low.

Hearing a passenger sitting in the next seat on the bus, while sharing her experience, she described one day she was traveling on a bus, and two or three seats forward, a well-dressed, young boy of the university was sitting, hand free in his ears and busy on mobile. The conductor of the bus humbly asked him for the fare, but the boy did not respond. The conductor asks two or three times again and finally pulled one of the hands-free. The student got angry and started yelling, “I will not pay the fare. I am a student, it’s my card, but how will you know, as you are uneducated.”

The conductor stood still and quiet for a while, staring at the boy. Then he replied: “If educated people are like you, then Thank God I am not educated.” And then he slowly walked away.

However, the passengers are not always wrong or unfair to the transporters. Sometimes, the driver demands unexpected fares. Hamza, a local passenger, said, “I travel every day from Peshawar to Taxila, which has a fare of Rs230. When the government restricts the transport, the drivers start taking advantage by charging Rs350-400. Transporters take revenge from passengers.”

The majority of people traveling on public transport belong to the middle or lower class who do not afford to pay high fares. They get into arguments and eventually into fights on fares. Extremes of anything on any end are harmful and surely destroy the balance in society.

As coronavirus and prevailing unstable economic situations add the potential threats to humanity’s survival, the transporters and the travelers need to cooperate to maintain the balance of justified fares to facilitate each other in these tough times rather than taking undue advantage of the situation.