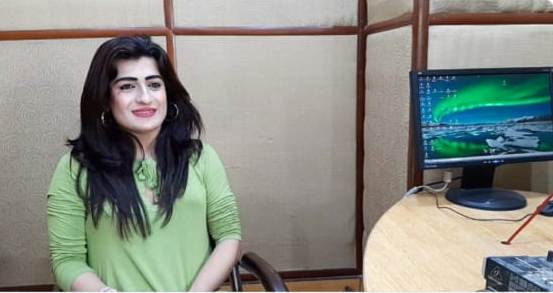 PESHAWAR: The only transgender person in Khyber Pakhtunkhwa to complete her M.Phil, Chocolate, wants to quit dancing and do a respectable job in future.

Hailing from Shabqadar area of Charsadda, Chocolate says she had completed M.Phil in Finance and Accounting, which is like a dream come true for a transgender person.

“Despite being highly educated, I still perform in dance programs as it is my source of income. The reason behind not quitting dancing is that I am unable to find a suitable job and even if I find one, then I could not continue due to societal stereotypes,” she said while talking to TNN.

Chocolate says she would quit dancing after finding a respectable job. She says dancing is not her passion – she does it as a compulsion to earn livelihood.

The talented transgender person says she wants to pass the CSS or PMS exam and become an officer to serve people of her community. She believes that she will get powers after becoming an officer and then no one will harass or tease her.

Narrating a harassment incident, she told TNN that after passing the graduation, she applied for job in the KP Local Government Department, passed the written test and went for interview. She said she was shocked when an officer there offered her the job in return for ‘friendship’. She said she then decided to concentrate fully on higher education.

“I suffered a lot while getting education as girls and boys used to tease me and teachers also used to beat me. Like every other place, transgender persons also face discrimination at schools,” she said.

Chocolate says she aspired to become a doctor or a lawyer and got help from family and friends initially, but later on everyone left her and she completed M.Phil on her own.

“My parents used to advise me to go to Saudi Arabia on work visa as I may not find job in Pakistan even after getting higher education,” she said, adding that two of her brothers had already gone to Saudi Arabia after leaving education and her father was also asking her to make CNIC so that she could also be sent there. However, she said, she did not go to Saudi Arabia and completed graduation from the University of Peshawar.

Chocolate said her father stopped helping her after graduation after which she started meeting her education expenses from money earned through dancing. She said her parents were well off and she had some money in her account when her parents ditched her. She said she started a job, but lost it when the officers came to know about her gender.

A girl who wanted to be a vegetable seller!