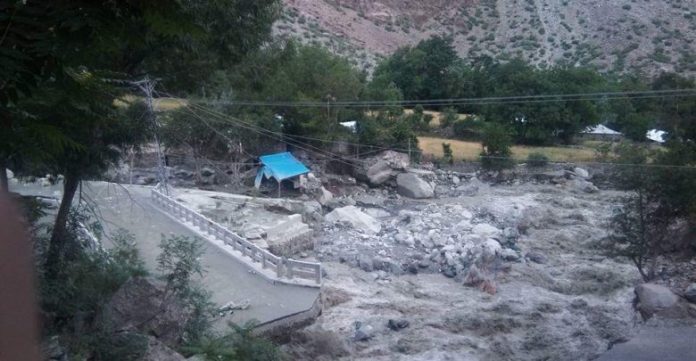 PESHAWAR: Provincial Disaster Management Authority (PDMA) on Wednesday issued flood warning due to further increase in temperature that could result in glaciers melt in district Chitral.

The Pakistan metrological Department has already predicted heavy rains in KP, also in Chital, therefore the PDMA issued flood alert in the district and urged the DC Chitral to prepare for any emergency situation. PDMA said the all the steams in the mountainous district of Chitral will be flooded during the coming few days, therefore, locals have been advised to adopt precautionary measures.

PDMA directed the district administration and the other relief organizations to prepare for any emergency situation. They were also asked to follow precautionary measures to protect people and other property from flash floods.

The DG PDMA asked the Deputy Commissioner Chitral to call a meeting of district coordination committee to oversee the preparedness for any emergency situation in case of flash floods.

The DG PDMA has also directed tourists to avoid visits to the far-flung areas of the Chitral district during the coming few days. Locals were asked to keep in close contact with the relief and rescue organisations in the district. They were asked to dial 1700 to get information about the situation in Chitral district.

On July 8, due to rising temperature, Glacial Lake Outburst Flood (GLOF) was reported in Golain area of Chitral district due to which multiple houses and cattle were washed away. Flood in streams had blocked roads due to which tourists, including the sister of PM Imran Khan, were stranded in far-flung areas of Chitral.

The Metrological department of Pakistan has predicted rains in Khyber Pakhtunkhwa (KP), Punjab and Kashmir. The Met Office said that weak monsoon currents from the Arabian Sea are continuously penetrating in upper and central parts of the country.  Met office furthered that strong monsoon currents from Arabian Sea and Bay of Bengal are likely to enter in upper parts of the country from Wednesday and likely to spread central and southern parts from Thursday to Saturday.