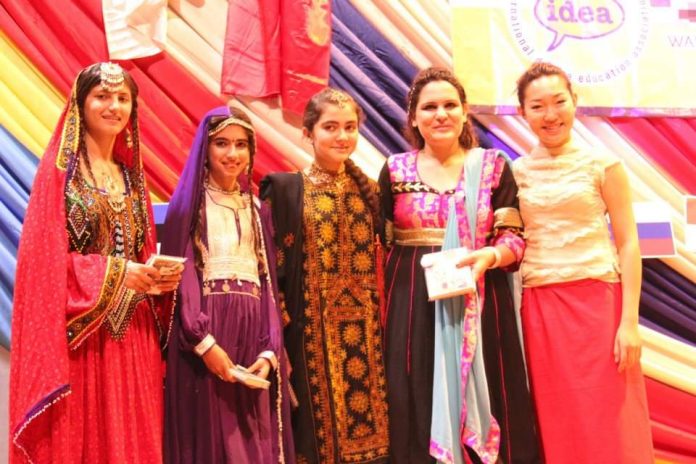 PESHAWAR: In 2011, when I took my 4th grade mid-term exam, my class teacher told me “Mamarha! We are not going to give you the trophy this year if you again hide yourself in the washroom and avoided coming to the stage.

I requested, “Sir please, I cannot face the crowd“

He ignored me and left. When my name was called up for the first position, I gathered some courage and went to the stage. As I saw the crowd clapping, my vision went black and I fainted.

Few months later, my teacher challenged me, “Mamarha! You have a very sharp mind. You wrote every topic so creatively so why are you not confident in expressing these ideas? We are asked to nominate one student for the international debate championship. You are our school’s top student since the beginning. I am certain you will be nominated, so prepare yourself mentally.”

One night we were preparing our dinner when the telephone rang. It was our teacher. My father picked up the receiver and a moment later he screamed. “What?!!” We all sat up abruptly and wondered why he would scream like that.

He shared the news that our school was blown up. We all were stunned. My younger brother started dancing and exclaimed. “Hurrah! Yes , I have not done my homework.”

We looked at him and raised our eyebrows. My brother closed his mouth but still released a muffled laugh and said, “I am kidding”. No one had dinner. No one could sleep either.

My father told our principal that we could not waste one year of education of our children. He suggested taking the final exam. But the problem was where to have exams as everything in school had turned into rubble? We had two of our papers in a nearby mosque, but the cleric raised objection. “It’s embarrassing that both males and female sit in the mosque together. This place is for worship, but you people are defiling it by turning it into an examination hall,” said the cleric.

We had our other papers outside on the service road as everyone was too frightened to provide space for the examination. It was our last paper when my principal called me. When I went to meet him, he was sitting on a small rock under a shady tree. I felt pity for him. He was searching for something in huge piles of files.

“There I found it. Mamarha Afridi. We are asked to nominate one student to participate in an international debate championship to be held in Thailand. Are you willing to participate in this competition?” he asked.

I thought for a while and wanted to say, “I cannot even talk to my friend, how will I deliver a speech to a crowd” but I replied respectfully to my principal, “Yes sir I want to take part.”

The weather in Khyber tribal district was quite cold. I packed a travel bag with three velvet outfits, two pairs of shoes and an extra sweater. My mother was so excited that she cooked tandori-roti (thick-smoked bread, baked in a muddy fire oven) tomatoes, eggs fried paste, omlate, and a very oily butter dipped parata (oily bread). I ate more than usual. We were accompanied by our English teacher. He looked at my travel bag and remarked “We are not going for even one day stay. Why such a heavy bag?”.

I answered, “No sir, anything can happen. We should be prepared.”

To keep myself warm, I wore a black velvet dress with pink ribbon on the border. The ribbons were torn from my back. The weather of Peshawar was much warmer than Khyber. Everyone wore linen to keep themselves cool. My dress looked odd and I was feeling very warm, but I pretended to be fine.

One of the girls asked me, “Don’t you have clothes? Are you okay wearing old and warmer clothes? I will give you mine.  (laugh)”

Everyone in the circle laughed at my dress. I felt embarrassed. Everyone was a stranger for me. I was hiding myself as a few participants mocked me due to my inappropriate dressing.

One of the training officers, named Sana Ejaz reached avenue. She came to every participant to take attendance. She asked me, “What’s your name, sweet doll?’

I  tried to reply, “My name is ….” Swallowing saliva, which echoed in my ears.

She asked me again, “Pardon please?”

I cleared my throat and answered again, “Mamarha Afridi.”

She pinched my cheeks and said, “ Wow such an attractive Pashto name.”

I smiled at her. She was the first person I had ever met who had praised my name. Otherwise my name is the topic for everyone to mock me.

“Please don’t call up my name, I am so nervous I don’t want to participate,” I requested.

She hugged me and said, “Believe me. You can do it! Consider the hall a field and the audience as potatoes, tomatoes, and pumpkins.”

When she left, the group, which was mocking me asked why Sana Ejaz hugged you, I ignored them.

One of the girls said, “Take signature from me that this girl will be selected, of course, she will. She has relatives here. You will soon see the practical example of nepotism and favoritism.”

I repeated the words to myself, “They are potatoes, tomatoes , and pumpkins.”

My teacher visited me and asked “What’s the progress?”

I answered him, “Sir they are potatoes, tomatoes , and pumpkins.”

He looked me with wide-opened eyes, “What?”

I pressed my teeth and replied , “Sir, I mean, I like to eat these vegetables.”

Sana Ejaz started the program. I was so inspired by her that I was copying her seated posture. She was playing with her hair and observing the participants. I did the same things she was doing. She called my name. My heart throbbed quickly. When I reached the rostrum, my vision blurred, my throat went dry. Thanks to the rostrum, it hid my shaking and shivering feet. I was feeling dizzy, but I held the rostrum firmly and recalled Sana Ejaz’s words and began to deliver my speech.

I was selected in top ten. I was confident enough to deliver my next speech affectively. Afterwards, we the ten participants did our best. But the top three results would be announced after a week.

Everyone was asking me about my result. I was 100 percent sure I would not be selected. I used to say, “I am not interested going abroad.” I felt pain in my heart as I said it.

As we were without a school, I was unable to contact my principal to ask about my selection.

Early in the morning, my father received a call and told me with wet eyes, “you did it!” and hugged me.

I jumped and went to see my mother. “Mor (Mama)!”and hugged her.

Please cook potatoes tomatoes and pumpkins, I am love with these vegetables.