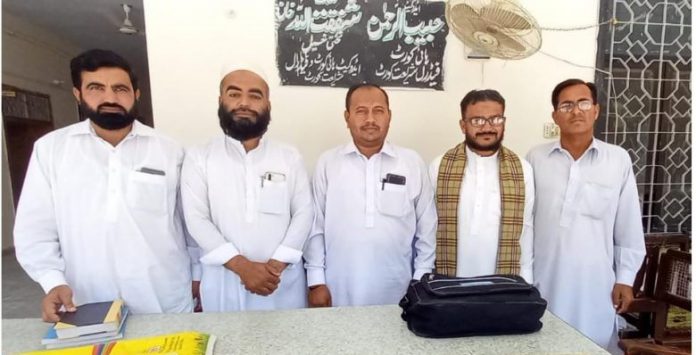 PESHAWAR: A local court in Lakki Marwat has granted bail in a case that was registered against journalist Ghulam Akbar Marwat.

The court of Additional Sessions Judge Kashif Dilawar granted the bail on Thursday. The journalist’s lawyers told the court in their statements that the Food Department had filed charges against journalist Ghulam Akbar Marwat last month under Section 189 (threatening a government employee), 186 (interfering in business), 506 (death threats) and 3/6 Food Act (sale without price list) which was contrary to the ground realities and was indeed a mala fide act.

The lawyers argued that their client had learned from credible sources that the government had fixed a quota of 700 bags weighing 20kg for the Mela Mandirakhel area of Lakki Marwat but the Food Department was exploiting the people of the area by supplying less food.

The lawyers said that their client made a video of the area inside a truck supplying flour, fulfilling his professional responsibility. In the video, it is seen that outside of the truck is full of flour only to deceive the people while the inside of the truck was completely empty.

The court was told that since the authority to supply food and flour to the area was granted in the district food department, cases were registered against the journalist at the concerned police station so that they could cover up their wrongdoings that were divulged and brought before people’s eyes in the said video.

On the other hand, the public prosecutor completed the arguments for cancellation of the pre-arrest bail plea in the case against the journalist, after which the additional sessions judge granted the bail application.

Lakki Marwat journalists consider the bail confirmation of the journalist as a victory of truth and expressed their determination to continue their struggle for the welfare of the people, democracy, constitution and law.

Situation of journalism in Pakistan

Haq Nawaz Kati Khel, a senior journalist and analyst, says prosecuting or killing journalists for exposing government corruption and embezzlement, threatening them through violence and kidnapping is not a new thing, but such tactics cannot oppress the voice of truth.

Haq Nawaz said that the accusers of most of the affected journalists across the country are still not getting punishment and if the process of punishment speeds up, the crimes against journalists can be reduced.

He said that the world journalists’ bodies were declaring Pakistan as a dangerous country in terms of journalism and its practical demonstration in recent days was seen in the form of shooting and injuring senior journalist and former PEMRA chairman, Absar Alam, by unidentified persons.

“Shooting, killing, kidnapping, torturing or registering false FIRs is a message to other independent and democratic journalists to remain silent, but I don’t think that through such tactics anyone can stop the flow of information, it’s just the their misconception.”

Haq Nawaz Kati Khel believes that the ban on journalists or media outlets will directly bring harm to the country. According to him, “ban means the propaganda of government or state statements only which as a result deprives the people of the other side of the picture, then the people will utilize international or any independent media to find out the other side’s story and then the same media will manipulate the minds of the people of Pakistan.”

Reporters Without Borders, a global non-governmental organization for the protection of journalists and the freedom of the media, ranks journalists’ freedoms in a 2021 report. The report termed Pakistan as a country of worrisome to journalists.

The report surveys 200 countries in which Pakistan has slipped five steps more than last year and this year Pakistan has been ranked 139th to 145th in terms of freedom of expression.

The report says that the conditions of press freedom in North Korea, Vietnam, China, Iran and India are very bad. Norway, Finland and Sweden are in the top three with the best rankings.

The report also quotes the United States as saying that even here, reporting on sensitive issues has not been easy for journalists.

A detailed report by Reporters Without Borders states that censorship has increased in Pakistan. There is pressure on the media.

Reporters Without Borders reports that if a television or journalist gives airtime to activists of parties opposed to the government, their work is somehow interrupted because according to the government that specific journalist or organization has violated the limits set by the establishment.

“There have been a number of incidents in the year 2020 where a journalist has been kidnapped in order to send a message to other journalists not to do stories that are unwelcome or else wise your family will not be safe.”

According to Article 19 of the 1973 Constitution of Pakistan, expression of opinion is a fundamental right of every citizen and he/she can exercise this right through media as long as his/her views and opinions do not harm the dignity of Islam, national security, defence, relationships with neighbouring countries, public order, decency, ethics and respect for the courts.

Similarly, according to the amended Article 19A of Article 19 of the Constitution, every citizen has the right to access to information, with a prerequisite that such information is not against any law.

Journalists’ organizations are blaming the government for the problems faced by journalists. To address this, the newly-appointed Federal Minister for Information Fawad Chaudhry Hussain has admitted in his tweet that journalists have always rendered their services to the country and the nation. Now providing employment and private housing to them is the priority of the government.

Fawad Chaudhry said that the government was considering a regulation to pay salaries and insurance to journalists.

According to his tweet, his first priority is the process of film and drama renewal. According to him, young drama and filmmakers will be given a loan facility of up to Rs50 million from a successful youth program.

According to the tweet, the minister will provide private housing and health card facilities to journalists associated with print and electronic media from the housing scheme, while facilitating digital media will also be a priority of the government.