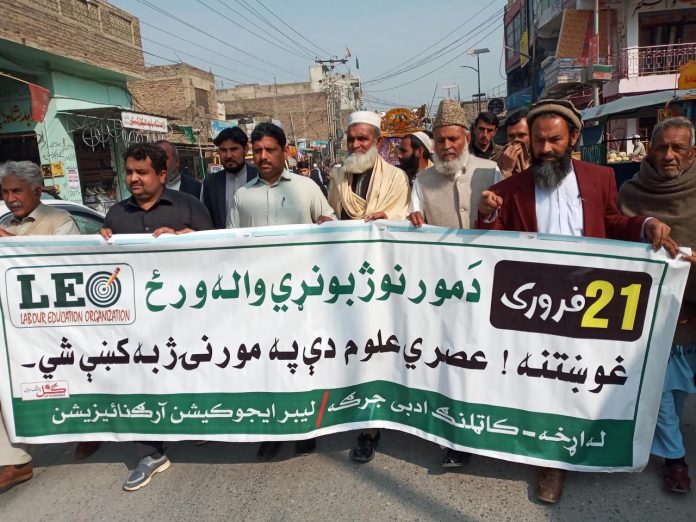 PESHAWAR: The International Mother Language Day is observed every year on February 21 in Pakistan and rest of the world to promote awareness of linguistic and cultural diversity and to promote multilingualism.

The Awami National Party (ANP) Culture Director Dr Khadim Hussain said while talking to TNN on the occasion of International Mother Language Day that this is a great tradition which is observed in the entire world to protect and promote cultural identity of different communities.

Dr Khadim Hussain says linguistics experts throughout the world are unanimous over the importance of mother language as an important mean of communication which makes the process of collective strategy easier. He says creativity, invention, research and collective institutions like court, politics, journalism, market etc could not have adopted its present shape without the amalgamation of mother language.

Dr Khadim supports the idea of basic education in mother language, which he believes makes it easier for a student to learn other languages as his/her sense of imagination and thinking improves in this way.

Dr Khadim says Pakhtuns are a strong nation because Pashto language has 5,000 years old history. He says a nation can only prevail when it is strongly connected to its cultural norms, history and language.

According to a UNESCO report, 240 languages have become extinct since 1950. There are about 6,000 languages in the world and 43 percent of these languages are becoming extinct gradually.

Chairman Pashto Department of Abdul Wali Khan University Dr Sohail Khan, who is writher of eight books, says intellectuals and scholars throughout the world agree that promotion of creative work and all factors of education are not possible without a linkage to mother language.

He says the government should pay attention to fully utilizing the potential of thousands of years old Pashto language.