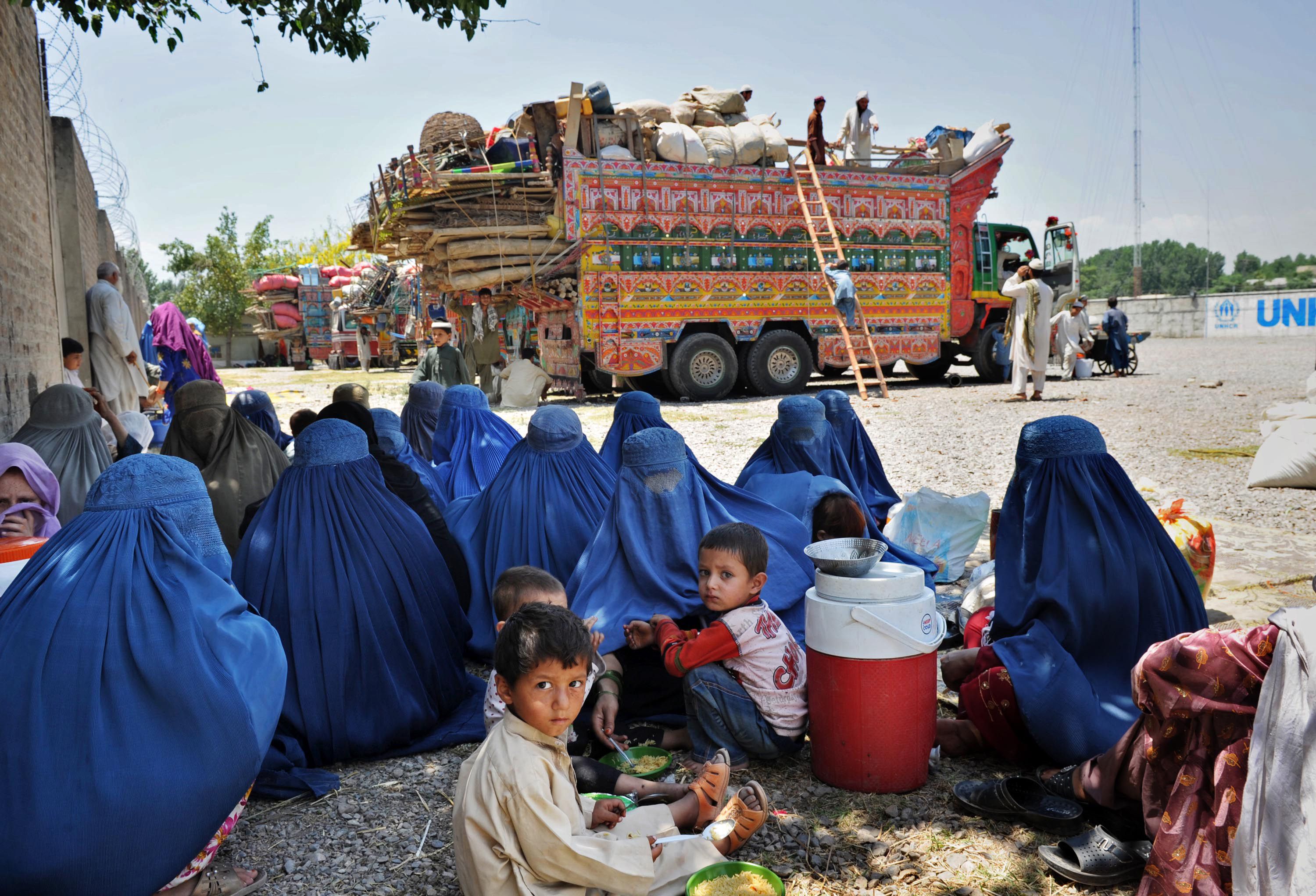 KABUL – Inside the U.N. refugee agency (UNHCR) tent set up for landmine awareness training in East Kabul, Shir Alam looked visibly uneasy amid the small crowd of refugees that had gathered around the cluster munition samples.

Alam was cradling the infant he had just met – his two-year-old niece, who had just arrived from Pakistan along with her mother as part of a program of mass returns that started in July 2016.

Alam’s sister-in-law Fariba and her four children are among the 1.2 million returnees from Pakistan that the International Organization for Migration (IOM) counted in nine provinces across Afghanistan in their latest survey from July. The report also mentions 222,000 returnees from Iran and another 41,803 people from Europe and Turkey.

Having just arrived from the Pakistan-Afghanistan border, the family was re-registered by UNHCR, given vaccinations and advised about the risk of landmines and disease before being sent to their villages in Baghlan province. They were among a group of 100 or so refugees returned by Pakistan gathered at the UNHCR processing centre in East Kabul.

Meanwhile, the worsening security situation in Afghanistan has prompted more military action from the U.S. Despite his earlier rejection of the U.S. war in Afghanistan and the ensuing 16-year presence of troops in the country, President Donald Trump committed to a multipronged “anti-terrorism mission objective” – to fight an estimated “20 terrorist or insurgent groups,” including the Taliban, al-Qaida and ISIS.

This will mean more troops on the ground and renewed airstrikes in already restive areas of the country. With extremist groups and their affiliates expanding their reach and intensity, the country is mired in uncertainty and violence that renders the return of civilians inherently unsafe, regardless of their formal acquiescence, according to many observers.

As part of a multiyear study in Afghanistan, the research team at Kabul-based think tank Samuel Hall highlighted these growing dangers as a major driver of displacement inside the country and migration to other countries, including to Europe. “Most Afghans whom we interviewed had made a subjective assessment of the threat to their lives based on their prior experiences and the general situation in their communities,” explained Nassim Majidi, cofounder of Samuel Hall, in a series for Refugees Deeply about Afghans on the migration trail to Europe.

Amid the grim conditions, the only consolation for Alam and his family was that Fariba is a registered refugee and so eligible for the nominal cash aid that would be handed out before she proceeded with her journey home.

With UNHCR estimating that more than 1 million displaced Afghans live in Pakistan without registration, tens of thousands such undocumented refugees returned in August without even this level of support. The Norwegian Refugee Council (NRC) reported that an average of 2,600 undocumented Afghans returned every day during the second week of August. Such groups are even more vulnerable as they do not receive the cash aid, medical support and food provisions that registered refugees like Fariba do.

Beyond the initial support, survival will be an uphill battle for most returnees. Alam has become the default head of the household. Reluctant to discuss where his brother had gone, he had just arrived that morning from Baghlan to welcome his sister-in-law and escort her to her matrimonial home. As he feigned attention with intermittent nods of acknowledgement toward the trainers, he wondered how he would provide the basics for his newly expanded family.

The risk of stepping on a landmine was not his most pressing concern, although the latest update by the U.N. humanitarian agency reported increases in women and child casualties in the first half of 2017 as a result of unexploded ordnance.

The family will struggle to get even the basics. Water has been scarce in Alam’s village and power is intermittent amid fighting and an economy damaged by decades of conflict and stripped of its resources.

“Access to education and drinking water are the two important priorities for us, otherwise we will have to move on, to somewhere else in Afghanistan or to another country,” said Alam, a 44-year-old with four children who lived as a refugee in Pakistan in the past.

His concerns are well founded, as NRC staff reported severe water shortages, especially in areas such as Nangarhar that were receiving a bulk of the returnees over July and August.

“Children appear visibly malnourished and families are lacking clean drinking water, shelter and sanitation facilities,” said Will Carter, NRC’s head of program for Afghanistan, following a visit to Nangarhar. The NGO warned that the consequences of lack of basic aid could be fatal.

To add to the pressures, many of those returning from Pakistan were born there, with limited previous contact with their homeland. They are now headed to their villages as perfect strangers, without the support systems they need to get by.

While Fariba has a place to stay in her in-laws’ home, she will need to find work and a way of simultaneously looking after her four children until they can be admitted to a school. Having gone through the expedited returns process that lasted about two hours, the 21-year-old mother sat waiting with her four children, her cot, a few dishes and a pile of clothes.

Beneath the scorching July sun, the delicate skin on the bridge of her youngest child’s nose was peeling as the family waited patiently, in complete silence. The young girl’s gaze was transfixed by the open-back truck meant for goods and animals that would take her and her family to their new home.

While local vendors distracted the children with ice-cream sticks, the returning men and women appeared anxious. They would need to leave Kabul as soon as possible to avoid an overnight haul. The entire group was headed to Baghlan in the truck that also held their meager possessions and some domestic animals they had brought with them from Pakistan.

The route between Kabul and Baghlan has been highly susceptible to incursions, bombings, thefts and kidnappings in recent months. The main artery between Kabul and provinces to the northeast, Baghlan was the epicenter of fighting during August.

“Pakistan’s government was good to us for many years by letting us stay. Now it is time we go home,” said Fariba. She did not talk about the dangers ahead and it was not clear how much she knew about the ongoing fighting and difficulties of daily life.

Shortly after the family’s arrival in Baghlan, Taliban forces captured a key district in the province, overthrowing the local police head quarters. Many of the returnees, like Alam and Fariba, now face further upheaval and the possibility of being displaced all over again.