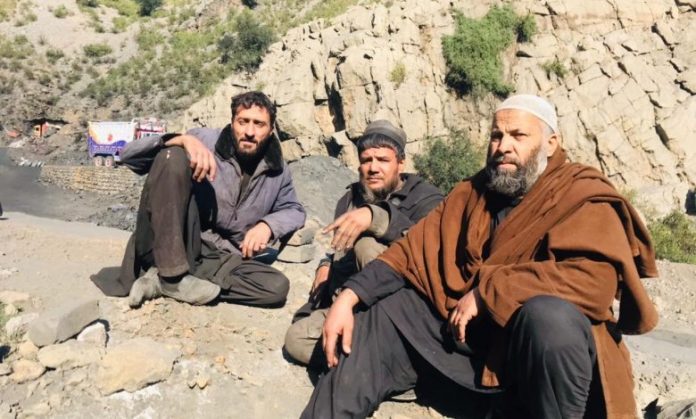 Usman Ali lost his father in a coal mine accident in Darra Adamkhel a couple of years ago.

Usman is jobless; however, his mother is not allowing him to work in a coal mine. “My father lost his life at the depth of 1300 feet inside a coal mine,” he said.

Usman went to work at the coal mine after his father’s dead; however, without telling his mother. “She was really hurt with this so I have to stop working as miner,” he said.

Usman belongs to Zarra Killay of Shangla district in Malakand division.  About 80 per cent males of the district work in the coal mines across the country. Many of these coal miners die due to accidents, leaving behind orphans and widows.

“Even people refer to our village as ‘village of orphans,” he said.

Shakirullah from the Dheri village council area of the Shangla explained that the village earned its moniker due to many deaths related to coal mines accidents.

“Many of the village died in mine accidents while a large number are handicapped,” he said.

Shanlga district has a population of 500,000 people. About 80 per cent of district males work as coal miners in mines across the country. Rampant poverty, lack of economic opportunities and education are basic factors that are pushing people into working as coal miners.

Many of those who have worked inside coalmines are suffering from chest and respiratory ailments.

Khaista Khan, a coal miner is suffering and chest and respiratory illnesses due to his work inside coalmines. He said that spread of Covid-19 really frightened him. “As I have a medical condition and could die after contracting the virus,” he said.

Mr Khan said that no one approached them regarding vaccination while he was working at the mine. He said that now his situation has deteriorated and due to breathing problems he even could not even walk properly,” he said.

He said that miners’ lives could be saved if these mines are legalized and provided safety equipment.

He said that sometimes these contractors also got miners murdered over grudges.

He said that most of these mines follow Covid-19 SOPs.

Mr Sarfarz said that they themselves approach health department to vaccinate coalminers. He said that so far, no coal miner has contracted Covid-19.

“At the start of vaccination, many of the miners harbored misconception about Covid-19 vaccination,” he said.

Mr Sarfarz said that the union worked hard to remove these misunderstanding and now miners were vaccinating themselves.

However, he said that when mines were closed at the start of the pandemic, government did not financially helped the miners. “We asked at the authorities for help which never arrived,” he added.