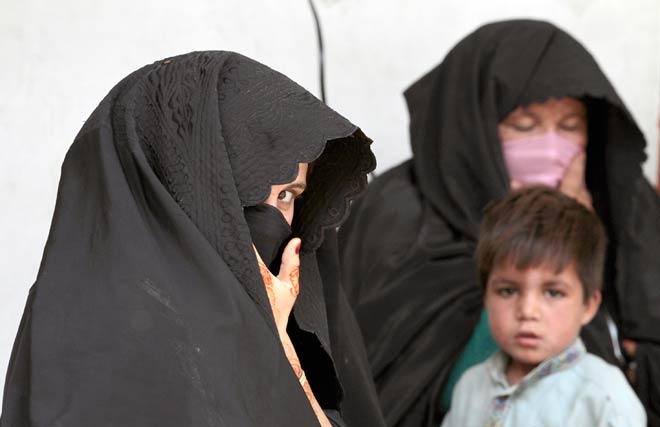 PESHAWAR: The life of 30-year-old Madina Bibi from Bajaur tribal district took a turn for the worst when she was hit by a landmine blast and lost her one leg.

She said while talking to TNN that she was only 18 years old when she stepped over a landmine on a mountain. The fingers of one hand of Madina Bibi were also broken in the blast, but her arm remained safe, while her sister-in-law, who was also accompanying her, suffered injuries to her eyes.

Madina Bibi said she used to spend much of her time on bed after the landmine blast and her mother used to look after her. Now that she has grown up, she tries to do something on her own, but faces difficulties due to disability.

No marriage proposal came for Madina Bibi due to her condition, so she continues to live with her parents. She said there are many other women in the area who became victim of landmine blasts.

Law and order in Bajaur

Law and order challenges surfaced in Bajaur, having a population of over a million, in 2008 when kidnappings increased, and barbers were asked not to shave beards, while girls’ schools were also closed by militants. This was followed by blasts at different places and the militants held sway over large areas.

A large-scale military operation named ‘Sher Dil’ was launched in Bajaur with the support of local people, and the military defeated militants in 2010. However, that success came at a huge cost in shape of death of many security personnel, citizens and damages to houses and properties. Militants left behind countless landmines, which also targeted innocent people like Madina Bibi.

No authentic data of those rendered disabled in such incidents is available. However, a report mentioned that artificial limbs were provided to about 100,000 people, and 70,000 of those were the people who were rendered disabled due to landmine blasts and other acts of terror in merged tribal districts.

Clearing of landmines by the security forces continues, but still such incidents happen after some time which kill and maim innocent civilians. The tribal elders and social activists are continuously demanding the government to remove landmines from the area.

Demands for clearing of landmines

When Naqeebullah Mehsud, a youth from Waziristan, was killed allegedly in a fake encounter in Karachi, Pakhtun Tahaffuz Movement came into being and its main demand was clearing of landmines from the entire tribal region.

Sajjad Ahmed Advocate, one of the petitioners, said awareness campaigns must also be carried out in merged districts about the dangers posed by landmines and who to ensure personal and family security under these circumstances. He said according to data collected by him, as many as 800 people had died in 178 such incidents in South Waziristan during the last 13 years, 250 children were rendered disabled, 77 lost eyesight, while 4,000 cattle were also killed.

Not only Bajaur, other tribal districts were also affected badly during the wave of terrorism.

Ali Afzal Afzaal, a senior journalist in Kurram, told TNN that most of Afghan refugees entered Pakistan via Kurram after 9/11 because it touches three provinces of Afghanistan. He said so many people lost their lives in Kurram in terror incidents and sectarian clashes.

Jameela Bibi, now 45, from Parachinar was not hit by a landmine, but her fate was even worse as her house was hit in an airstrike, when she was just 12 years old, leaving her and other members of the family critically injured.

Jameela also could not get a marriage proposal due to her disability and is living in her parents’ home. She said she particularly faces worst difficulties when her health condition deteriorates and when she needs to see a doctor, because she can hardly move. She said her family is poor, while the government has not extended any financial assistance to her.

Most of the women who were rendered disabled confront mental stress and anxiety as no one marries them and they are all alone to endure all difficulties.

Clinical Psychologist Arshi Arbab said some people in the society look down upon such women, due to which they confront mental stress. She said such women go into depression and inferiority complex and some also go to the level of thinking about suicide as life becomes a burden for them.

Arshi Arbab said disabled women often hear taunts from other women in the family, particularly from brothers’ wives. She said the government should come to the help of such women, build vocational training centres for them and also provide them jobs and loans for businesses.

Treatment for stress-related illness is something non-existent for women in merged districts.

Arshi Arbab said in most such cases, a woman patient is taken to some faith healer considering that she might be under some supernatural influence, which often proves counterproductive.

Zafar Khan, a sociology expert, said women are already deprived of their rights in our society, and when they confront any disability, then their life becomes even more challenging. He said many people in the society don’t properly behave with disabled people and they are subjected to discriminatory treatment.

Zafar Khan said there are few non-governmental institutions that want to work for disabled women, but they face security challenges in merged districts. He said special persons need special attention so that they did not consider themselves alone.

Journalist Razia Mehsud from South Waziristan said the area lacks basic facilities and the life of women is even more difficult as they had to fetch water from far off areas and take cattle for grazing.

In such a situation, when a woman is hit by a landmine, her life becomes even worse. She mentioned that a woman in the area was hit by a landmine and her husband was already ailing, so their little children were left at the mercy of God after that incident.

In another incident, a girl lost her both hands and eyes in a landmine blast. She said both these women are now living an extremely difficult life.

The Paraplegic Centre in Hayatabad, Peshawar, is a ray of hope for disabled women. Madina Bibi said her family brought her to Paraplegic Centre keeping in view her difficulties, and now she has got an artificial leg there, which is a great help in her movement. She said her life improved after getting an artificial limb. She said the government help can reduce difficulties of disabled women.