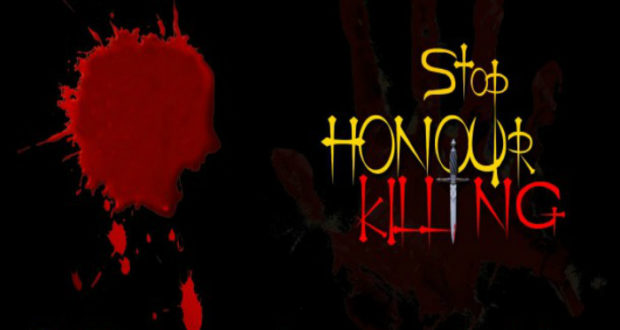 PESHAWAR: We are used to watching news on honour killings and I have also worked on several such news items. However, yesterday, it was a horrible experience when I saw the picture of a woman from Mardan whose hands and feet were fastened with ropes and she was strangulated with electric wires in the name of honour.

I just could not hold myself back over this cruelty of staggering proportions and decided to write on it. Honour killings are happening in our society since centuries and most of the times the victims are women. The killers in such cases believe as if they have protected their honour. Incidents like Mardan have happened earlier, but now such incidents are on the rise. Last year, a man killed his sister in Mardan because she entered marriage according to her own choice.

Is choice marriage a crime punishable by death? I would never endorse a girl eloping with someone and enter marriage without consent of the family elders, but it is also a fact that couples often take such step when their family members block all other options for them. Therefore, the family elders should also show some flexibility and support their children to enter marriage according to their own choice to avoid embarrassment.

Some people believe that they restore their honour by killing their women. But the main question arises that what happens to their honour when they dump the bodies of their women and other men come and lift their body. There is no honour in killing as every person has the right to live his/her life according to their free will. Our religion has also granted this right to women, but our society remains in denial mode.

Not only the victim women’s families, but the whole society is responsible for this cruel set up. Whenever a girl takes such a step, the society keeps on taunting the girl’s family and provokes it to take extreme step. Despite rise in literacy rate, the thinking of our society hasn’t changed. Now men are also killed in the name of honour. The question arises if a problem can be resolved within the home, then why it is brought before the entire world by taking extreme steps.

It has also been seen that people kill women for honour and then show it as suicide.

In Kohistan, several girls were killed in the name of honour and Afzal Kohistani, who raised voice against the killings and brought the issue before the whole country, was also killed few days ago. Afzal Kohistani repeatedly sought security, but he was denied it and his voice against honour killings was silenced for ever.

Honour killings are not coming to an end and that is one of the reasons that our society lags behind.

Taimoor Kamal, a human rights activist in KP, says such incidents are continuously increasing while unfortunately we even don’t have exact data of these killings in our province. He said often close relatives are involved in killing women for honour due to which police also don’t take much interest in the cases and the culprits escape punishment.

In 2014, a law was passed in Pakistan which fixed seven years term for culprits involved in honour killing. This term was increased to 25 years as the law was amended in 2016. The amendment also ensured that the culprits in such crimes will complete sentence even if the families of the victims forgive them. However, honour killings did not stop.

Our religion gives us right to enter marriage by choice. However, we should also keep in mind other golden principles of Islam and importance of family. Women can fight for their rights by remaining within the teachings of Islam.