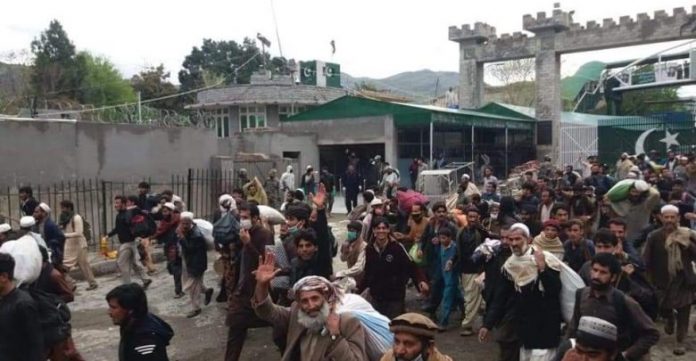 LANDIKOTAL: The administration at the Pak-Afghan border in Torkham on Tuesday failed to control the flood of people and thousands of them entered Afghanistan from Pakistan side without checking of documents.

The district administration of Khyber tribal district said relaxation was ordered for stranded Afghan nationals in Pakistan after the Afghan government announced relaxation in this regard. The local police said there was a huge rush of people on the border and women, children and elderly people also came there in large numbers. It said there were also many patients and their families were desperate to go to their country that is why they were allowed to go.

According to sources, the permission to Afghan nationals to cross the border without checking of documents was given after consultation between the border officials of Pakistan and Afghanistan. Thousands of people had gathered at the border gate and it became impossible for police to control them and keep them disciplined. Many people in the crowd started crying and shouting and they kept on appealing the authorities to let them go home and save them from further trouble as they already had enough of it.

Local sources said the security personnel showed a lot of patience and treated the people well. They made sure that all the Afghan nationals aiming to cross the border take benefit of the relaxation in rules owing to the coronavirus emergency.

In the first phase, thousands of people crossed the border without checking as the crowd was undisciplined. However, the security officials gradually got control of the situation and then started checking of documents in the second phase. The security personnel had adopted precautionary measures to protect them from exposure to the threat of coronavirus.

A flag meeting of the border officials of both sides was also held to complete the process in an amicable manner. The transporters cashed in on the situation and received fares from the people according to their free will.

Meanwhile, people called upon the government to also make arrangements for bringing stranded Pakistani nationals from Afghanistan. The Pakistan government has allowed partial opening of Torkham and Chaman border gates after which the Afghan nationals have flooded the borders to go home.