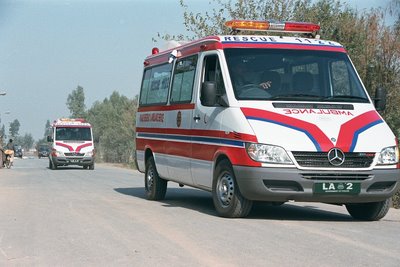 PESHAWAR: Three brothers died and their parents sustained injuries when roof of a house collapsed in Peshawar on Wednesday night.

Rescue sources said the incident happened at 2:00am in Din Bahar Colony, Stree No. 3 in Peshawar. Sources said five people were buried under the rubble three of whom died and two were rescued in injured condition.

The deceased were identified as 10-year-old Naseeb, seven-year-old Naseer and three-year-old Hidayat. The injured were taken to Lady Reading Hospital Peshawar.

A man allegedly shot dead his uncle and cousin over a land dispute in Badrashi area of Nowshera on Thursday.

Police said the incident happened in the morning in which a man, Aamir Khan opened fire on his 70-year-old paternal uncle Ghaffar Khan and cousin Irfan Khan over a land dispute, killing the father and son on the spot.

The bodies were taken to hospital for autopsy, while the culprit escaped from the scene.

A man was shot dead by unidentified armed persons in Qazi Pump, Rehman Baba area of Hangu on Wednesday.

The body of the deceased, identified as Hazratullah, was taken to Civil Hospital for post mortem. A case of the incident has been filed against unknown culprits.

A man was injured in aerial firing during a wedding ceremony in Charsadda on Wednesday.

Police said the incident happened in Prang, Maroofkhel, where one person was injured in the firing. Police arrested the bridegroom after the incident and sent him to lock up.

The injured person was taken to hospital where his condition was stated to be critical. It was second incident of aerial firing in Charsadda during the last three days.