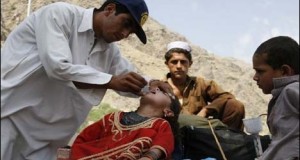 PESHAWAR, September 17: A three-day door-to-door anti-polio drive will be kicked off from today (Monday) to vaccinate 5.6 million children across the province and Fata. Around 33000 children would be vaccinated against polio in Fata.

The drive would be kicked off in these areas after September 25 as polio workers would be trained to launch door-to-door campaign.

The statement said that all out efforts would be made to achieve the target of vaccinating the targeted children.