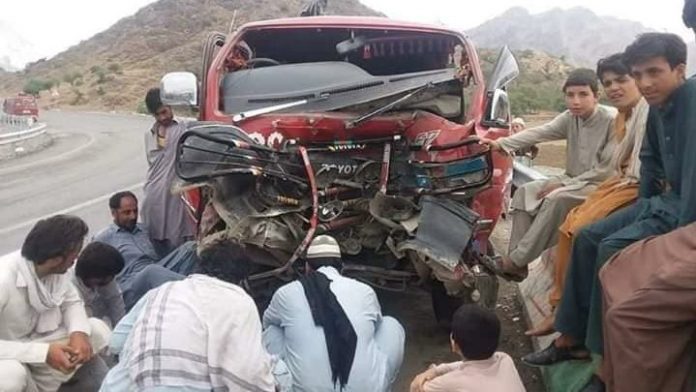 According to TNN correspondent, the first accident occurred in Zargar Abad area of Tehsil Safi where a speeding motorcycle collided with a motor car as a result three persons were killed while another one was seriously injured.

The second accident was also reported from the same Tehsil where two flying coaches collide with each other as a result three passengers are critically injured. They were taken to Hospital in Ghalanai Tehsil. The third accident was reported from Tehsil Halimzai where a speeding flying coach hit the motorcycle of tribal journalist Herat Mohmand in Atu Khel area of the Tehsil.

The journalist was injured in the accident and was taken to hospital where he is stated to be out of danger. The TNN correspondent reported that the injured of the accidents were taken to Hospital in Ghalanai from where most of the injured were referred to hospitals in Peshawar.

The injured were identified as Aziz Ullah who is head of the family, his two wives and five children. After the incident, the local people rushed to the site for the rescue operation and retrieved the family members from the debris. The locals said that it was due to time efforts that all the trapped persons were rescued alive.

All the injured were rushed to hospital in Charsadda from where doctors referred them to lady Reading Hospital in Peshawar.