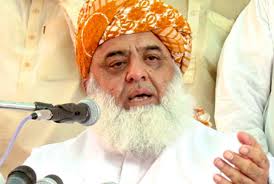 PESHAWAR, October 23: Three people have been killed and around 20 injured when a suicide attacker blew himself up close to the vehicle of Jamiat Ulema-e-Islam (JUI-F) chief Maulana Fazlur Rehman while the party’s rally was dispersing in Quetta, Balochistan province.

The police say that Maulana Fazlur Rehman was on his way back after addressing party workers at Sabir Shaheed Ground when the suicide attack took place in the evening. As a result, three people died on the spot.

The police say the JUI-F chief survived because of his bullet-proof car.

Maulana Fazlur Rehman told the media that one side of his car had been destroyed in the attack and that he had narrowly escaped.

Previously, he had been targeted in two suicide attacks in Charsadda and Swabi districts.

Fazl said he had not received any threat. “I have not been warned or threatened by any group. It is the responsibility of law enforcing agencies to investigate the incident,” Fazl was quoted by a Pakistani media organsiation.

The blast occurred less than 400 metres from the ground where over 15,000 JUI-F activists were present to attend the Mufti Mehmood Conference. Mufti Mehmood (late) was father of Maulana Fazlur Rehman.