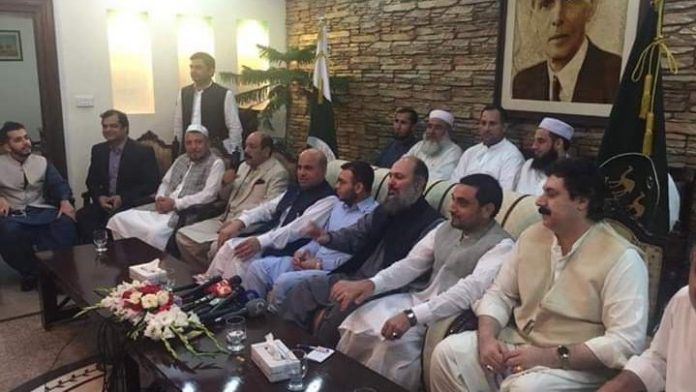 Balochistan Chief Minister Jam Kamal welcomed the new entrants into the party and hoped that they will work for the betterment of their areas. He thanked the new members for reposing their trust in the party and said his party will play its role in the politics of Khyber Pakhtunkhwa. He also thanked the Pakistan Tehreek-e-Insaf (PTI) for its help and support. Jam Kamal said the BAP will work for development of provinces and national development is their top priority.

About the recent no-confidence motion of the opposition parties against the Senate chairman Sadiq Sanjrani which was failed in secret balloting, Jam Kamal said the purpose of secret balloting is to ensure that every member can vote according to his conscience. He said it is wrong to assume that the winning party indulged into horse-trading. He said the opposition parties must do some soul-searching instead of indulging in blame game. He claimed that many opposition members don’t agree with the policies of their parties that is why they deviated from the party lines in the Senate. He guessed that opposition members may be not happy with the nomination of the National Party President Hasil Bizenjo as candidate for Senate chairman or there might be any other reason.

The Election Commission of Pakistan (ECP) had given time to the independent candidates winning the elections in tribal districts to join any party by August 3. Ghazi Ghazan Jamal and Muhammad Shafiq Sher Afridi have already announced joining the ruling PTI. Shafiq Afridi was already a PTI activist, but he was not given a party ticket to contest elections after which he decided to contest the polls independently. After his victory in the elections, the PTI leadership contacted him and took him back into the party fold.