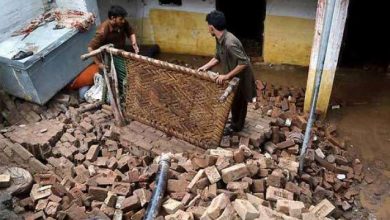 MIRANSHAH: Three children of a family were killed and eight others injured when roof of a house collapsed due to heavy rain and snowfall in Manzar Khel area of tehsil Datta Khel in North Waziristan on Saturday.

District administration has confirmed the tragedy and claimed that they are providing emergency support to the victim family. The administration further informed that due to heavy snowfall, the house of Muhammad Haleem caved in and all the people inside the house were trapped under the debris. Local people rushed to the site for rescue efforts. Though they managed to rescue the eight members of the family, however, failed to retrieve the children alive from the under the debris.

Khyber Pakhtunkhwa minister for information, Shaukat Yousafzai has also confirmed the tragedy and directed provincial disaster management authority to remain alert to face any emergency during the rainy days. The minister expressed deep sorrow over the deaths of children and directed the district administration to extend all-out support to the family.

There are also reports of houses collapse in Bara and Jamrud Tehsils of district Khyber in which four persons are reported injured on Saturday. The FDMA confirmed the tragedy and said that there were minor injuries to four persons who were taken to nearby hospitals. They also announced the tents, food and other necessary items are being provided to the victim families.

The FATA disaster management authority has declared an emergency in all tribal districts in wake of the new spell of rains. The concerned authorities were directed to remain vigilant and provide immediate support in case of tragedy. Director General FDMA Sohail Khan has directed to provide tents, foods and other necessary items to the victim families in North Waziristan and Khyber districts. The FDMA officials claimed that on emergency bases they are providing eight tents to family in Datta Khal and eighteen tents to the victim families in Khyber District.

On February 14, At least 14 people, including women and children, were killed and 13 others were injured in rain-related incidents in KP. The Provincial Disaster Management Authority has said that seven children, three women and four men died in separate in parts of the province. The torrential rain had also damaged properties, including nine houses, in the districts of the two affected divisions.