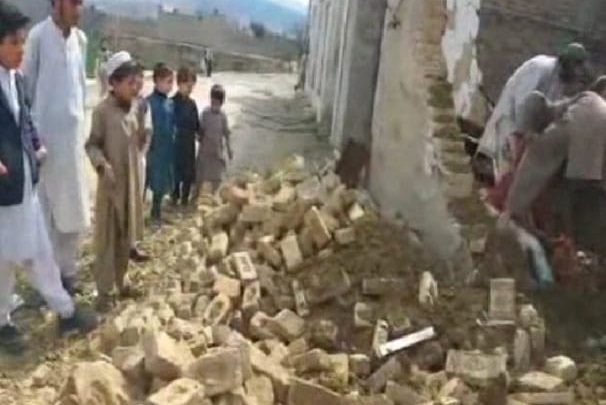 HANGU: Three members of a family were killed in roof collapse accident in Balia Meena area of the Hangu district on early Saturday morning.

The Hangu district police officials have informed media that 24-year-old Islam Deen and his family, including his wife and two daughters, were sleeping in the room when the roof of their mud-made house suddenly collapsed on their heads.

Police informed that the tragedy happened at 3 pm in the morning. After the local people heard the tragic news, they rushed to the house to participate in the rescue efforts.

However, despite hard efforts, they could not save Islam Deen, his twenty-year-old wife Gul Naz and their daughter alive. Mysteriously, a minor daughter of Islam Deen was recovered alive from the debris.

The local people shifted all the three dead bodies to hospital for medico-legal procedures after which the unfortunate family was laid to rest at their ancestor graveyard by hundreds of mourners.

BAJAUR: Protest demonstration was held against the ‘unjust’ electricity load shedding in Khar which was attended by a large number of residents, political activists and traders The demonstration was organised by Bajaur Youth Jirga at main Khar bazaar.

The protesters blocked the main road for all type of traffic and chanted slogans against the TESCO officials and the federal government. The protesters also burnt tyres on the road and blocking it for traffic.

The protesters said that the district had been subjected them to 23-hour load shedding on a daily bases for the last several months. They added that there is a shortage of drinking water besides, it has created other problem for the local people

The protesters said that Khar was the most congested area of the region where the residents were living in small houses and prolonged power suspension had badly disturbed their lives. The protestors said that the officials had promised that at least 12-hour power supply will be made however, the promised was not fulfilled