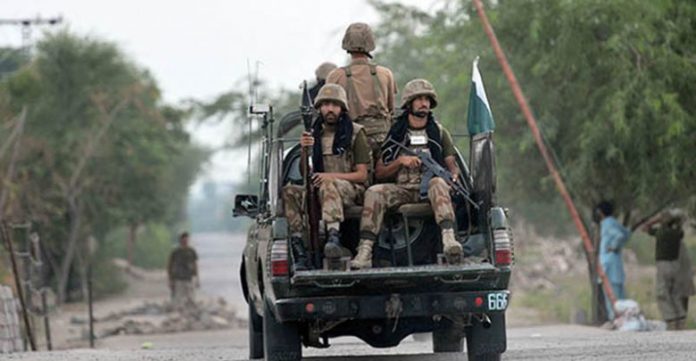 Official sources said a team of the security forces was on routine patrol in Mir Ali when a bomb planted near the wall of a school exploded on them. Three soldiers identified as Sepoys Imran, Attaur Rehman and Rafique were injured in the blast. The injured soldiers were taken to the Tehsil Headquarters (THQ) Hospital.

The security forces cordoned off the entire area after the blast and launched a search operation. However, no arrest was made till filing of this report.

Despite return of most of the temporarily displaced persons (TDPs) to North Waziristan, security forces come under attack from militants after interval of few days. Most of the times, they are targeted through improvised explosive devices.

On 9 February, three soldiers were injured in a bomb blast in Mir Ali area of North Waziristan. A bomb was planted in Koranai barani nullah which exploded on the soldiers.

On 25 January, two persons, including a security personnel, were injured in a blast near a security check post. A day earlier, two children of a family sustained injuries in a landmine blast in the tribal district.

Two students lost their lives when the boundary wall of a private school collapsed in Mohib Banda area of Pabbi tehsil in Nowshera on Saturday.

Local sources said the wall of Capacity Public School Mohib Banda collapsed at a time when the children were playing at break time and two students came under it. The injured students, identified as six-year-old Ismail and Ibrahim were retrieved by the rescue personnel and school administration from the rubble and were being shifted to hospital but they died on the way. The bodies of the deceased little children were handed over to family members after post mortem.

Deputy Commissioner Nowhsera Abdul Hameed has taken notice of the incident and directed Assistant Commissioner Pabbi to investigate the matter and present a report.