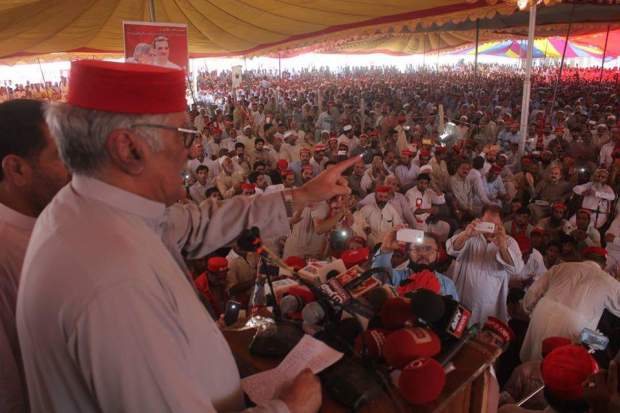 CHARSADDA: The Awami National Party (ANP) chief Asfandyar Wali Khan on Friday said the accountability court should have delayed the verdict in Avenfield reference against the Sharif family till July 25 to avoid its impact on the general elections.

Addressing a public gathering in the Prang tehsil of the Charsadda, the ANP chief said the timing of the verdict was wrong as it could benefit a certain political party.

Asfandyar said the stance of the ANP on the construction of the Kalabagh Dam was vindicated as Chief Justice of Pakistan Mian Saqib Nisar declared it controversial. He said the ANP was striving to unite the Pakhtuns of the Khyber Pakhtunkhwa and Balochistan.

He came down hard on the Jamiat Ulema-e-Islam-Fazl (JUI-F) Ameer Maulana Fazlur Rehman and Jamaat-e-Islami (JI) chief Sirajul Haq, saying both these leaders deceived people in the name of religion.

The ANP chief said some elements wanted to abolish the 18th constitutional amendment, but the ANP would never allow it. He also expressed concern over development schemes being carried out in some areas by the candidates of some political parties and said the caretaker government should have taken notice of the matter.