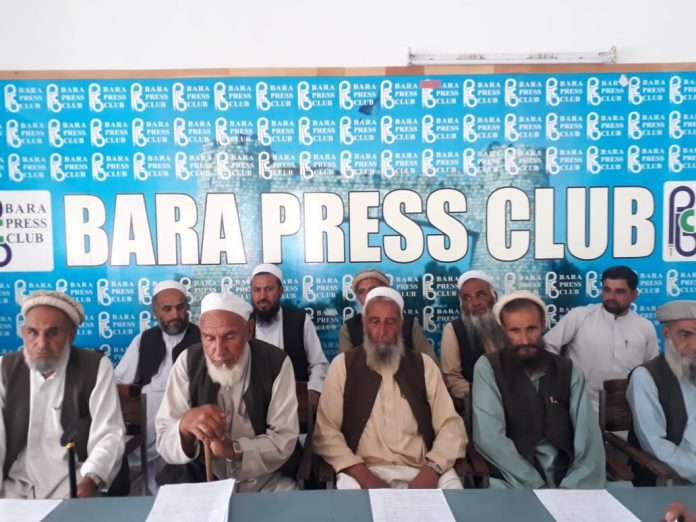 BARA: The elders of Sepah tribe of Tirah valley asked the government to provide basic facilities and proper compensation for the reconstruction of their houses and business centres before their return to the native area.

The return of the Sepah tribe Internally Displaced Persons is scheduled to start from April 10. However, the elders warned the government that their return without the provision of basic health facilities in their area will further increase their problems.

They were addressing a press conference here at Bara Press club on Monday. The elders including Qazi Waris Khan, Haji Misri Khan, SahibZada Nabi, Haji Gulab and others. Tribal people, they demanded, should be taken into confidence while taking decisions regarding their future and make it clear that any decision taken without their approval will not be acceptable to them.

The elders added that sending them back to their destroyed houses with compensation is tantamount to ignoring the sacrifices against the terrorism and militancy along with the security forces to clear the area. The elders said that there are no basic facilities of life available in their area, therefore, they do not want to go back until the government ensure such facilities as per the promise made with the tribal people and the internally displaced persons by successive governments.

They maintained that there is no health, education, or other facilities of life available in the tribal districts while the decades-long were have further devastated their infrastructure.

They demanded that the government provide them ass such facilities as their innate right on focus on the reconstruction and rehabilitation before, sending the IDPs back. Despite any reduction, said that the elders, their issues are increasing day by day and now if they were sent without any proper compensation or arrangements in their area, their issues will be doubled.