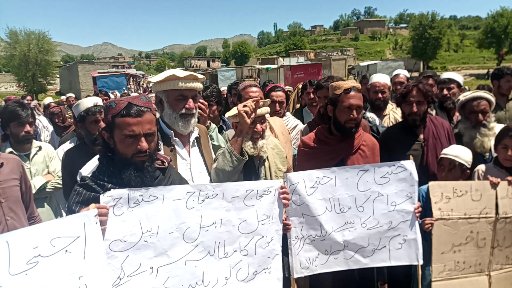 BARA: The people of Tirah valley of Khyber tribal district on Monday held a protest demonstration against the increasing use of ice (crystal meth) drug in the area and delay in payment of compensation cheques for houses damaged during militancy and military operations.

The rally was arranged by Shalobar Qaumi Council, a local social organization, and led by Dr Zakir Khan, Dr Hakeem Khan and Fazle Rabi Afridi. The protesters were carrying banners and placards inscribed with slogans against the use of crystal meth and for payment of compensation for damages. They held a walk from Tirah Maidan Shalobar Sports Complex to Pir Mela.

The protesting tribesmen said the survey cheques for damaged to houses could not be released despite passage of several years. They demanded the government to release the compensation cheques without further delay.

The protesters also expressed grave concern over increasing use of crystal meth among the local youth and termed it the result of negligence of the concerned authorities. They said joblessness is increasing in Tirah Maidan which is also causing increase in poverty ratio due to which the youth are indulging in negative activities. They said the situation could have been different had the government invested on development of the region, particularly in education sector by establishing schools and colleges. They said lack of education and job opportunities are the main reasons behind the increasing indulgence of youth towards the use of narcotics. They said strict laws have been introduced to control the menace of ice drug, but its implementation is yet to be seen. The demanded a decisive action in Khyber tribal district and rest of merged areas to eliminate the menace of narcotics once and for all. They said the government should also provide jobs to local youth to address their sense of deprivation.

The protesters called upon District Police Officer (DPO) Wasim Riaz and Deputy Commissioner Mansoor Arshad to take steps for resolution of these issues. They said if the administration continued to look the other way, they the local tribesmen would be compelled to form a Grand Jirga and boycott every initiative of the government.